Learn more about each ray-traced effect, see how they enhance Control, and download our Game Ready Driver so your system is optimized for this great new game. Or if you’d prefer a deep dive on each and every effect and aspect of Control, head on over to our comprehensive Control Graphics and Performance Guide.

Ordinarily, the FBC protect the U.S. populace from things that go bump in the night, while also covering up their existence, but recently the supernatural has invaded the Oldest House, the FBC's paranormal New York headquarters.

Players investigating the commotion at the FBC play as Jesse Faden, who just happens to arrive at the Oldest House when it all goes a bit… wrong. Explore, fight, and use abilities to give you an edge. And if you’re the type of gamer who loves to explore every nook and cranny, there’s plenty of Metroidvania-style secrets to discover and exploit as your arsenal expands. 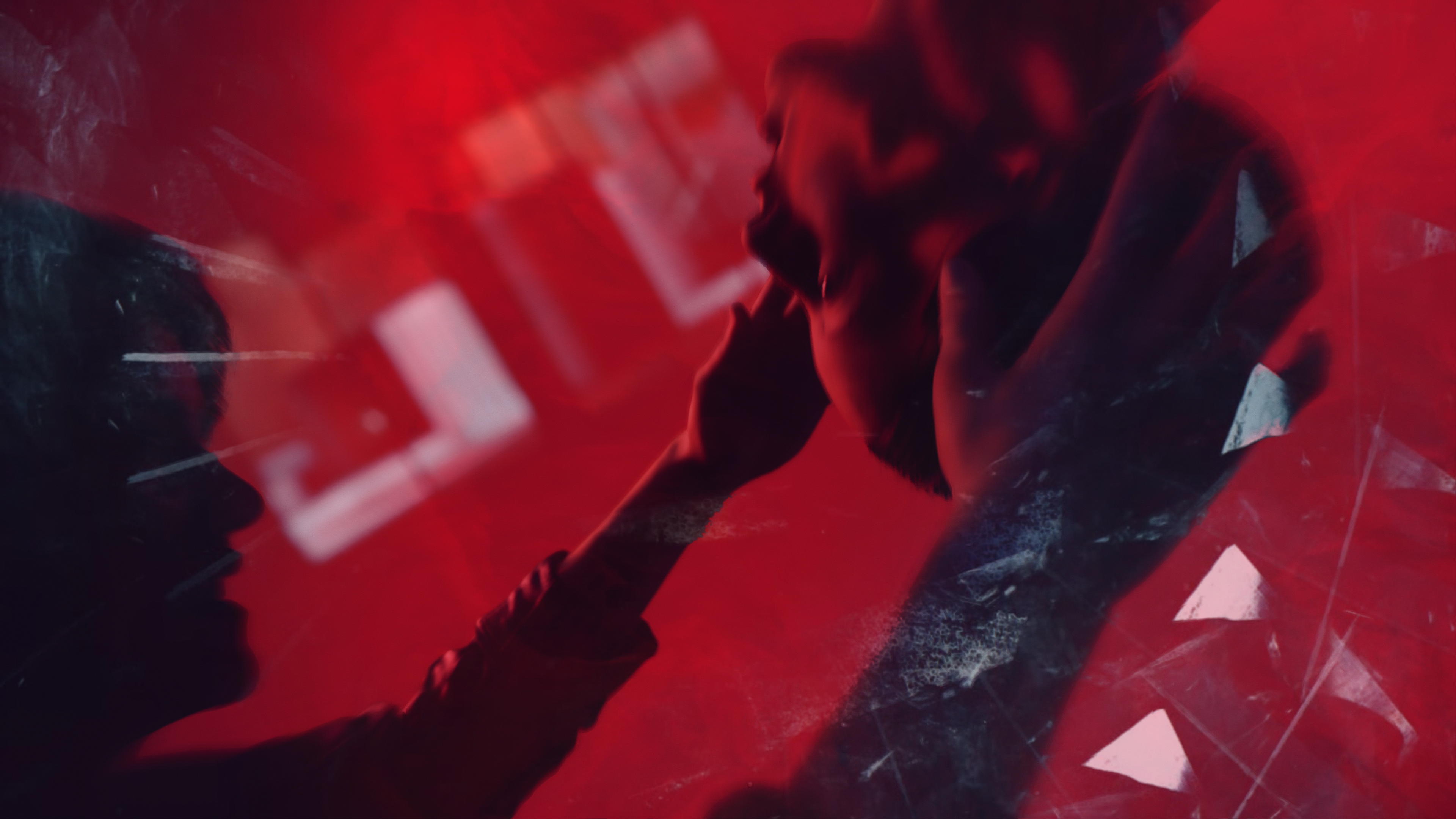 For Control, Remedy has rolled out a new iteration of their Northlight Engine, first seen in the transmedia-enhanced Quantum Break, which marked a new chapter in Remedy’s search for a filmic, cinematic look. Accordingly, Control is super-realistic, with soft, yet detailed visuals, that on PC are upgraded with several lifelike ray-traced effects that take graphical fidelity to new heights. 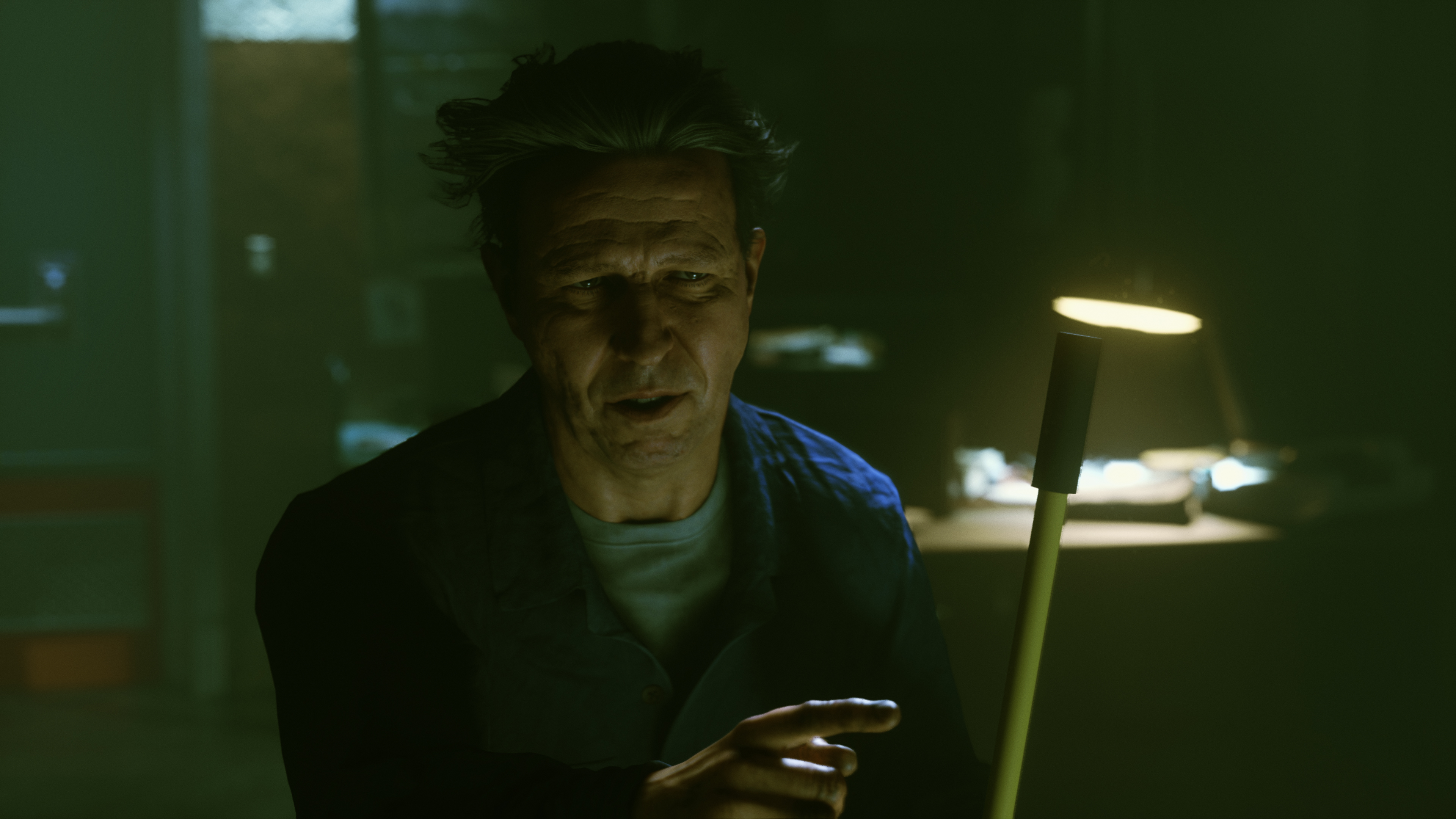 These five ray-traced effects enhance shadows, reflections, lighting, and more, and when enabled simultaneously complement and improve one another, enhancing every moment of your time in Control.

In general, ray tracing improves image quality immensely when applied selectively, but by employing multiple ray-traced effects simultaneously, nearly everything gains lifelike realism. And when your movements, attacks and actions are constantly affecting the appearance of the world, you feel more connected to the gameplay, as if your actions are having a real impact. That’s why movies ray trace their CG, so it looks and feels real, immersing the viewer in the action.

Having seen how it all comes together as a whole, let’s take a quick tour of each individual ray-traced effect.

Much of our world is to some degree reflective. Look around you right now - aged hardwood floors reflect light and show coarse object reflections; rough white walls reflect light; and pretty much anything that isn’t matte black to some extent reflects light and/or detail.

But because screen space reflection techniques struggle to accurately reflect a lake, let alone a lamp, most games lack reflectivity on both big and small game elements. And without this subtle reflectivity, which we observe every waking minute of every day, immersion and realism is greatly reduced.

By employing ray-traced reflections, reflectivity can be applied to all suitable surfaces and objects above, behind and around the camera, creating new, accurate reflections, in addition to improving the quality of existing screen space reflections. And with each adhering to the Fresnel Effect’s reflection equations, reflections appear as they would in the real world, maximizing realism and immersion. 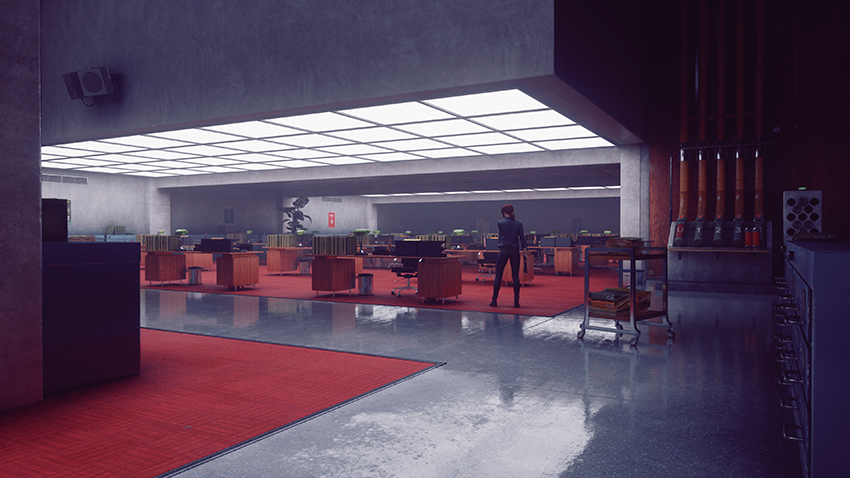 Screen space effects can only account for visible detail, whereas rays can bounce under objects and around the scene, which is why subtle details like the undersides of the desks are seen when ray tracing is enabled

Furthermore, ray-traced lighting, shadows and effects can be reflected, leading to the creation of accurate shadowing around objects, more realistic lighting on surfaces, and more dynamic combat encounters. And of course, each improvement is rendered and updated in real time, so as the environment changes so do the effects, which prior screen space techniques were unable to realistically achieve. 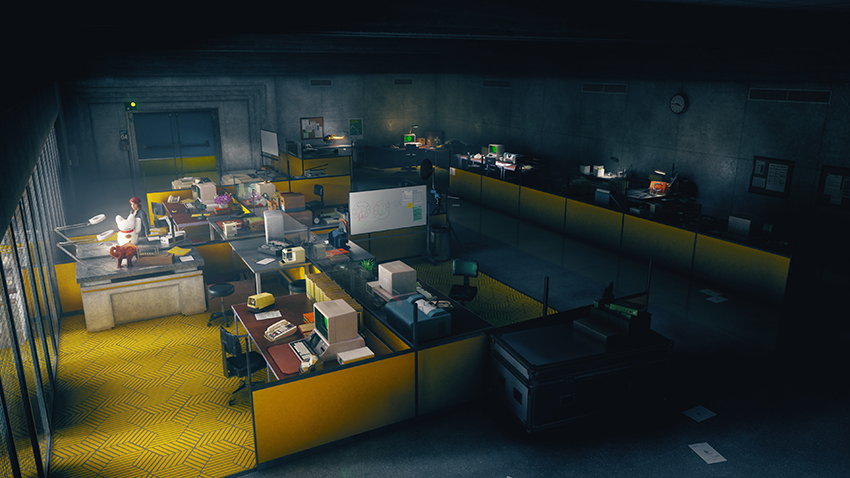 By enabling ray-traced reflections, light accurately bounces from objects onto walls, surfaces and other game elements; improved shadowing and shading is seen; and even the tiny Newton’s Cradle gains accurate real-time reflections

These stunning reflections, along with the other effects detailed on this page, are created by firing rays across the scene from the player’s camera, which are traced and combined to form the real-time results seen on-screen. NVIDIA’s Tony Tamasi, Vice President of Technical Marketing, demonstrates and details the process in his latest Tech Explainer:

Adding ray-traced reflections to glass is no different than ray tracing a puddle, if the background is opaque. When it’s transparent, with detail visible on the other side, in an office for instance, extra work is required. 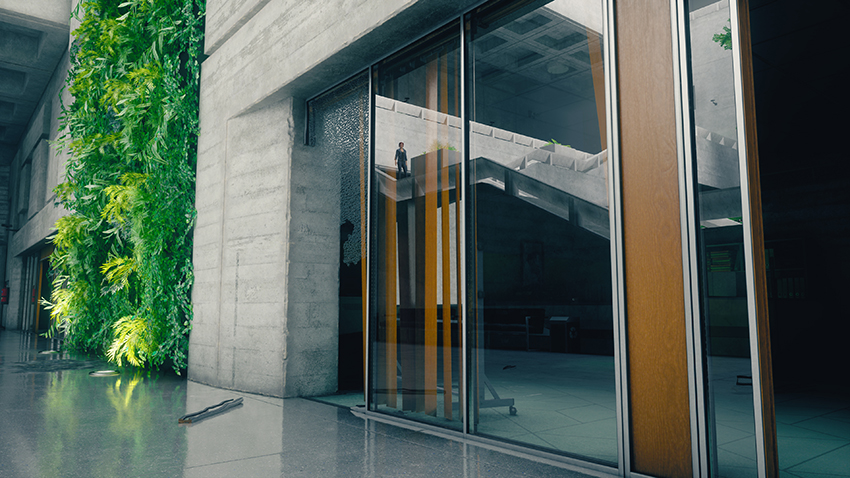 In the interactive screenshot comparison above, we see Control’s generalized cubemap reflections replaced with real-time transparent reflections capable of showing characters, NPCs and other dynamic game elements moving across the scene. And when we enable Control’s other ray-traced effects, we take image quality up another notch. 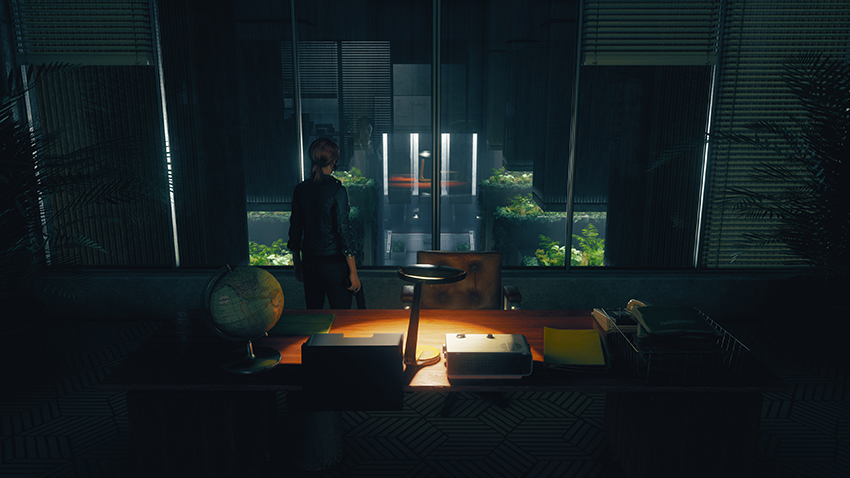 The Federal Bureau of Control is chock-full of offices and windows that make full use of this technology, and once you’ve experienced it, it’s impossible to return to the cubemaps of old. 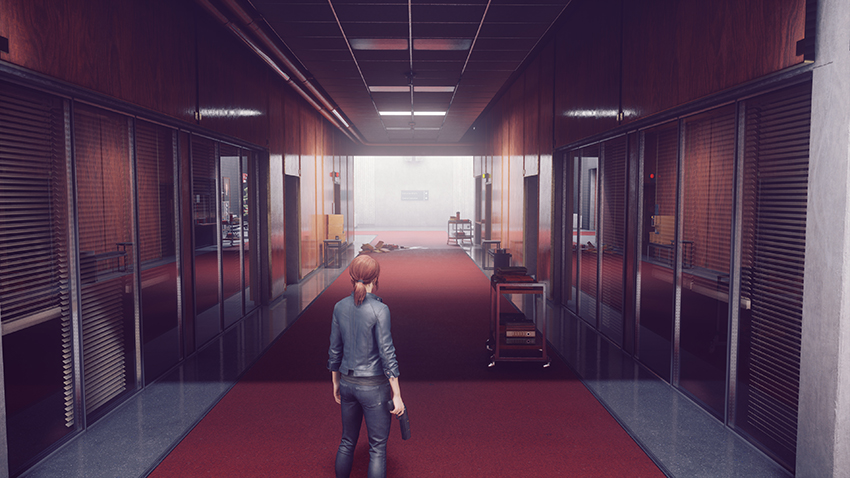 Control is illuminated with a mixture of lighting techniques, including precomputed global illumination. To add some extra pizzazz to proceedings, players can enable Ray-Traced Indirect Diffuse Lighting, which in simpler terms means that rays are traced, and if a ray strikes a bright light or surface, surrounding game elements will be naturally illuminated.

In addition, if the ray’s point of contact happens to be colored, that color will naturally spread to surrounding detail.

For an example, check out the interactive comparison below. Without ray tracing, a bright white spotlight simply illuminates green foliage. But with ray tracing, the bright light realistically bounces from the foliage, absorbing its color, naturally bathing the floor, walls, and deeper layers of foliage with green light. 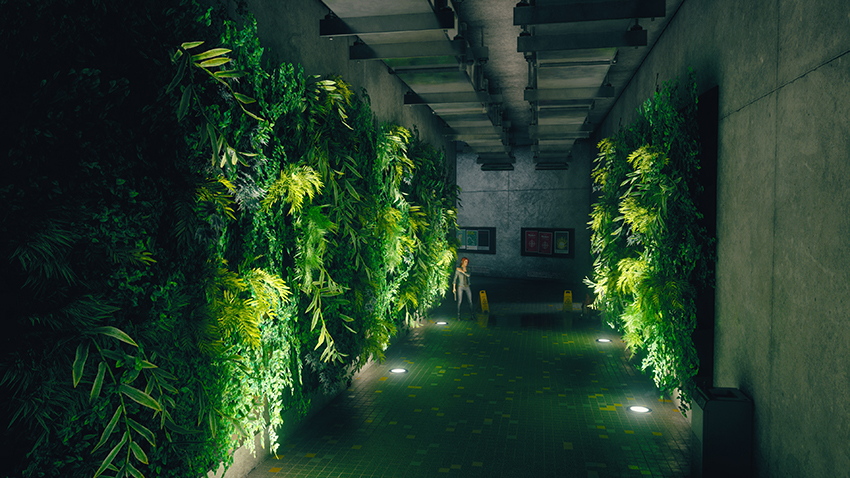 A secondary benefit of increased lighting precision is that additional, accurate shadows may be rendered, and existing shadows improved, further improving fidelity. For instance, in the comparison below, our heroine gains realistic shadowing around the folds and creases of her jacket, and objects are more accurately shadowed where light is occluded. 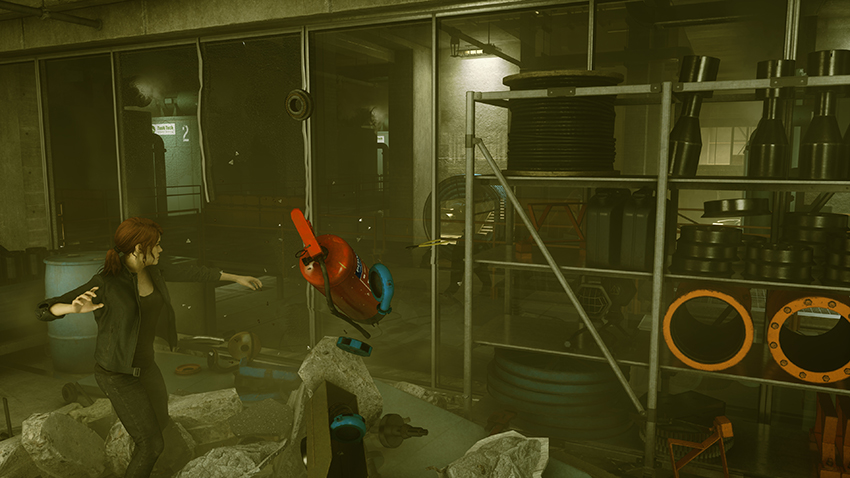 Control’s shadows are formed with traditional shadow maps, which serve its angular, functional offices rather well. When it comes to fine detail, however, they struggle – small and thin geometry is shown at low resolutions or omitted altogether, and objects far from the shadow caster may be barely perceptible.

If you’ve played plenty of games, you’ll know these are common issues caused by shadow mapping’s limitations, and the necessity for developers to manually balance visibility and quality of shadows, without tanking performance or using oodles of VRAM.

By enabling Ray-Traced Contact Shadows, we can give the shadow maps a helping hand, tracing rays to light sources to create accurate real-time shadows that improve what’s already there, and to render the detail they couldn’t. 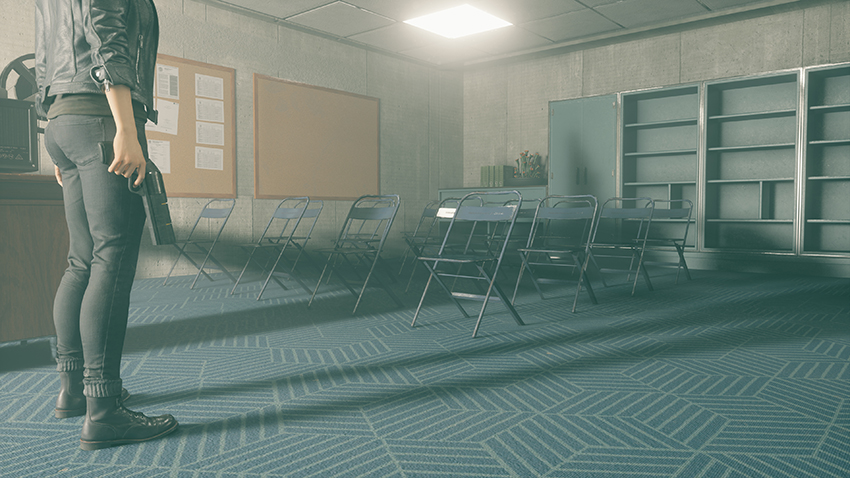 These naturally and effortlessly enhance shadow maps, ensuring each scene’s realism is improved. 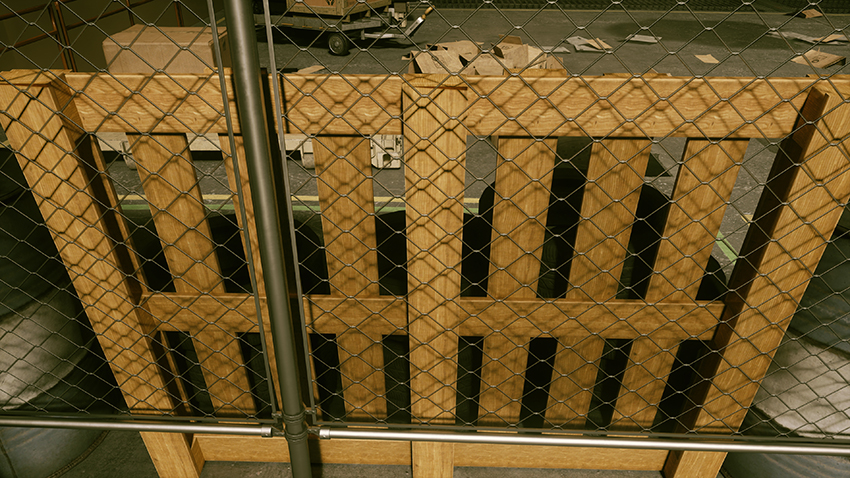 And when the rockets start flying, ray-traced contact shadows can be dynamically drawn as the light-emitting missiles pass through the scene, giving you an extra level of visual refinement. 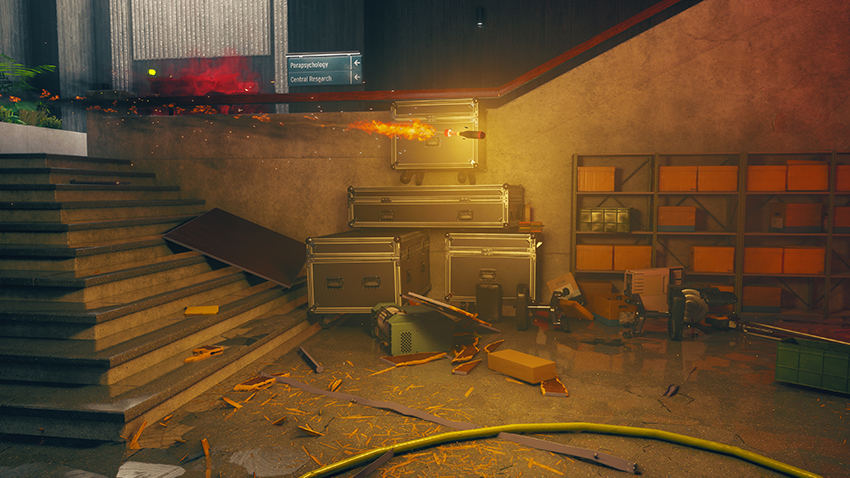 As you fight your way through the Federal Bureau of Control, it’s scenery and objects will take a beating, temporarily filling the vicinity with debris. Switching on ray tracing enhances each piece, enabling them to cast shadows, to be reflected on surfaces and other objects, and to affect the scene’s lighting. 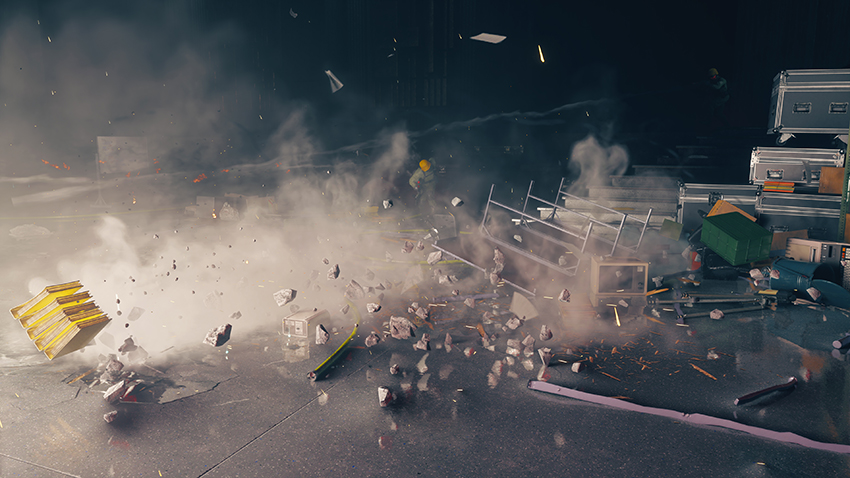 This seemingly minor enhancement quickly becomes a scene stealer once you encounter an otherworldly enemy that destroys everything in its path: 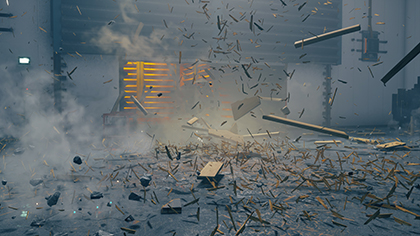 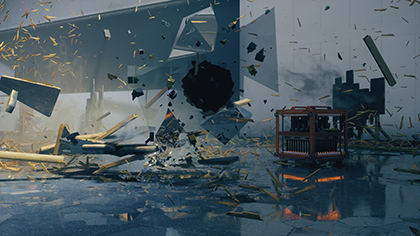 By enabling debris to be shadowed and reflected, it gains extra presence within the scene. And by enabling it to affect lighting, image quality is refined once more, taking us a step closer to photorealistic visuals.

NVIDIA has made great strides in improving the performance of ray tracing, optimizing game engines, game content, and our own drivers. Nevertheless, simultaneously enabling a multitude of complimentary ray-traced effects will be performance-intensive.

To ensure you can experience these breathtaking effects at smooth, enjoyable framerates, we’ve added NVIDIA DLSS to Control, increasing performance by up to 74% in our testing: 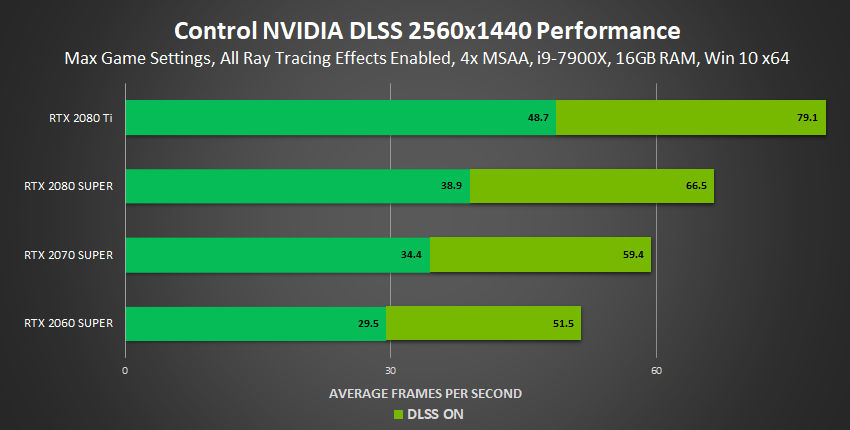 RTX ON: every ray-tracing effect is fully enabled and utilized in our benchmark

To provide extra flexibility, Control’s DLSS includes a new option that allows users to select the underlying target render resolution -- effectively a DLSS quality knob. Upon selecting NVIDIA DLSS in the settings menu, users can choose from one of two Render Resolutions. The lower of the two provides the biggest performance boost, while the other, shown in our benchmarks above, emphasizes higher image quality. This flexibility allows gamers to tune to their preferred experience.

Optimize Your Experience With Our Game Ready Driver

For the best Control experience we recommend updating your system with the new Control GeForce Game Ready Driver. This includes day-1 optimizations and fixes, and will ensure the best possible experience from the second you start playing. 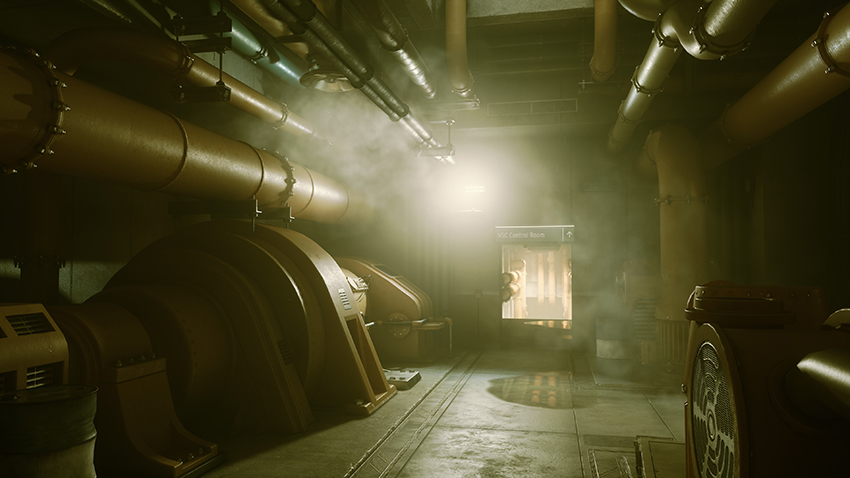 Before now, these were simply impossible to render, but with ray tracing, lifelike visuals become a reality.

To see them in action for yourself, pick up a copy of Control with the purchase of a GPU, desktop or laptop participating in our current bundle. But before you play, download and install our Control Game Ready Driver for the best possible day-1 performance.