The GeForce RTX family has expanded with the launch of our new SUPER graphics cards, enhanced GeForce RTX 20-Series GPUs that are up to 25% faster, giving gamers best-in-class performance and features, and fast, high-fidelity real-time ray tracing.

Remedy Entertainment is known for making great games with great graphics, starting with Max Payne and its signature Matrix slow-mo in 2001. Max Payne 2, Alan Wake and Quantum Break followed in the years since, and in 2019 Remedy and 505 Games will release Control, a third-person action-adventure set in the shape-shifting building of the Federal Bureau of Control (FBC), a secret government agency that keeps the supernatural out of the public eye. Except it’s all gone a bit wrong, as you might have guessed, giving Remedy the perfect excuse to render a beautiful game with shifting walls and floors, and stunning, varied locations.

MachineGames has crafted three well-received Wolfenstein first-person shooters since 2014, and now the venerable franchise is going co-op with the release of Wolfenstein: Youngblood on July 26th (though you can also play solo, if you prefer). Youngblood heads to alt-future 1980’s Paris, and unleashes BJ Blazkowicz’s twin daughters on the unsuspecting occupiers, in an effort to find and rescue the legendary hero.

For the PC release, Bethesda Softworks and MachineGames have chosen NVIDIA GeForce to be the PC platform of choice, which means we’ll be enhancing the game with cutting-edge ray-traced effects, and performance-accelerating NVIDIA Adaptive Shading. 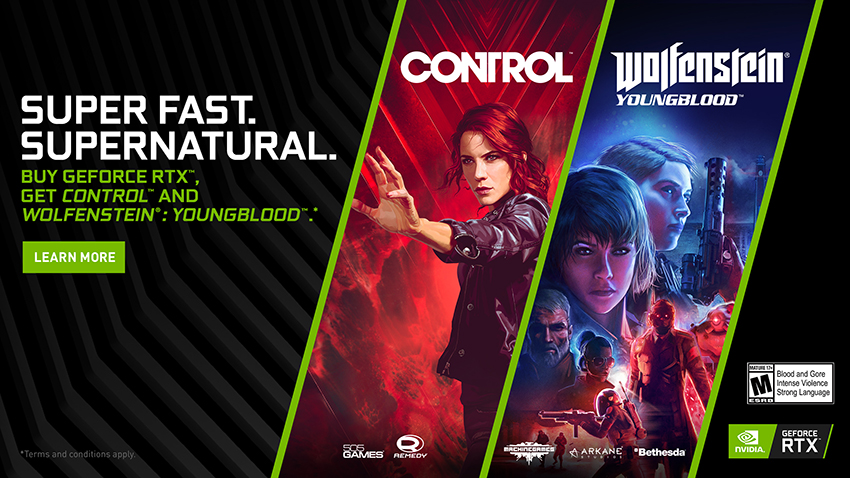