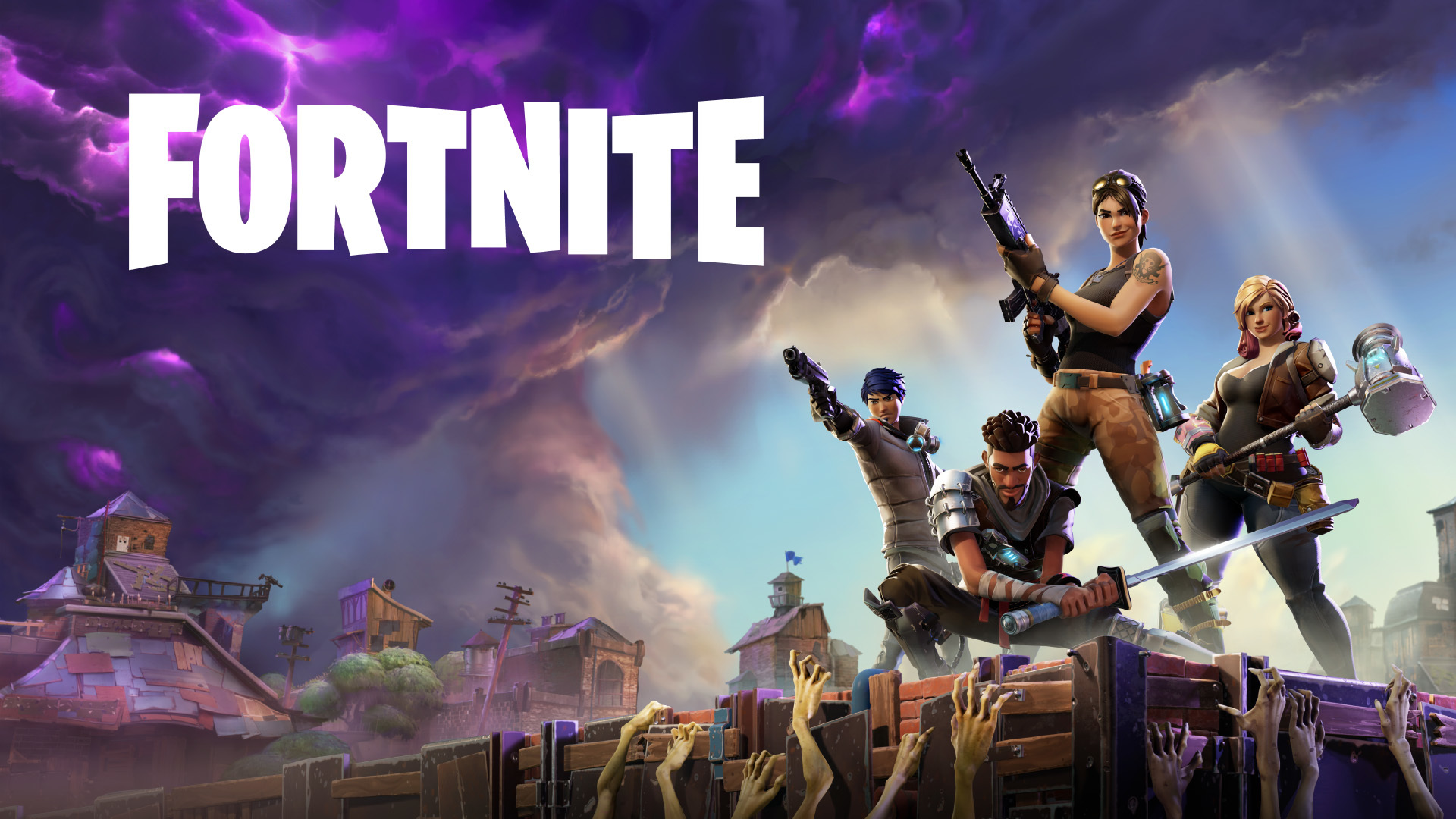 If there's one universal axiom, it's that building forts is awesome, even as an adult. Epic Game's latest title takes that concept and runs with it in Fortnite, which goes into paid Early Access July 25th (or July 21st for those who pre-order). Of course, creating a fort is only the beginning. After all, what good is a fort without something for it to defend against? And make no mistake, you'll have plenty of opportunities in Fortnite to see how your bunker stands up. That's because a gigantic storm is ravishing the earth, unleashing droves of deadly monsters, bent on destruction. Humanity has been nearly wiped out, and your enemies are just itching to finish the job. It's up to you and three other players (via grouping up with pals or randomized drop-in matchmaking) to stem the invasion, rescue any survivors you come across, and send the monsters back to oblivion.

There are four main classes in Fortnite: Outlander, Soldier, Ninja, and Constructor, with hundreds of variations for each, including male and female versions, distinctive outfits, and upgrades. As you play, you'll collect hero cards of different rarities for all of them. The more hero cards you acquire, the more abilities, powers, and perks you'll have access to. The Outlander excels at discovering crafting ingredients for forts and explosives, while the Soldier, perhaps not too surprisingly, is your go-to class in combat. The Ninja is a fast-moving, double-jumping disruption/melee specialist, and the Constructor can repair and buff structures with superior speed—perfect for reinforcing forts at a moment's notice. You'll accrue XP as you go along too, boosting your arsenal of high-powered heroes.

But before you begin your fort-based masterpiece, you'll need to venture out and harvest materials. One of the most ubiquitous substances is wood, and it's used for crafting basically everything. Then there are bricks—ideal candidates for shoring up walls to protect against Husks. Metal is also up for grabs, and you can use it to make some exceptionally strong structures. Topping it off are nuts and bolts, which are your main ingredients for traps and weapons. 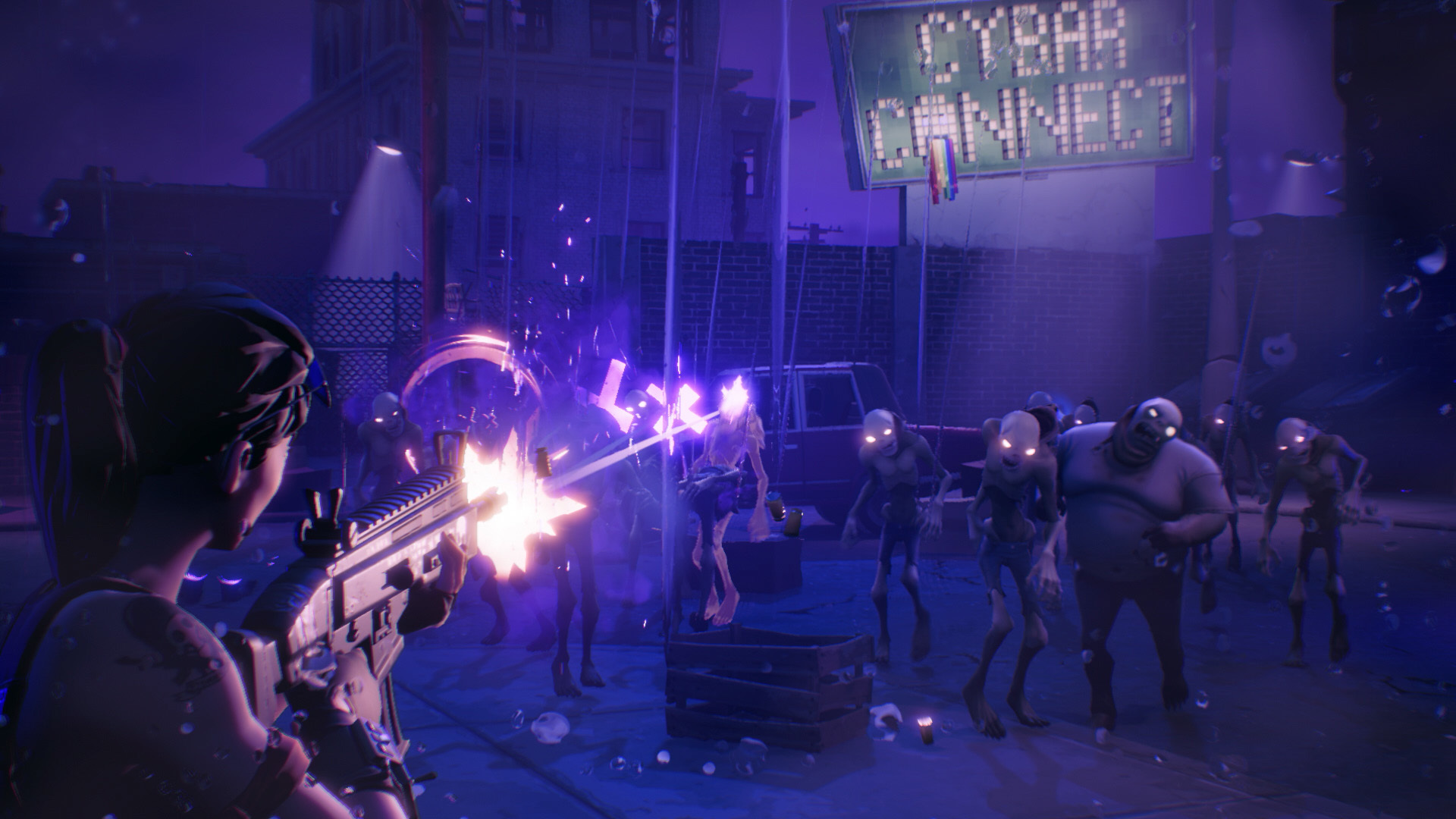 Obtaining materials is just a matter of using your pickax to bash away at certain items such as cars, lamp posts, trees, and more. And since Fortnite's vast and detailed environments are procedurally generated, there's a lot of variety in scenery. After choosing a zone, you'll find yourself traipsing through forests, weaving in and out of buildings in sprawling cities, and jogging down suburban streets, depending on the given setting. Once you've gathered some basic wood, you'll be able to put up a fledging but decent fort, complete with a few traps to even it out. It won't last long though, so you'll want to upgrade it as quick as possible, using bricks and metal to make it truly dependable. You can put up fences, stairs, parapets, walls, bridges, ramps, gates, and lots more. Eventually, your once small fort will turn into a castle-like entity, with various levels, traps, and sniper towers.

After you've built a section of your fort, it doesn't need to stay that way. It can often be beneficial to adapt on the fly, and Fortnite encourages you to do so by utilizing Edit Mode. With it, you can customize fort sections to service your immediate needs, including precisely placed doors and windows. Are you suddenly being bombarded by monster-spewed artillery? Start making some roofs to protect your crew. Are Husks overwhelming you? Create lethal choke points by funneling them through fenced areas filled with traps. Are the monsters dismantling your walls? Team up and repair the weakened areas to keep the storm's minions safely outside. Fortnite is a game of creativity, imagination, and improvisation; the more you experiment and communicate with your team, the more you'll see what works best. 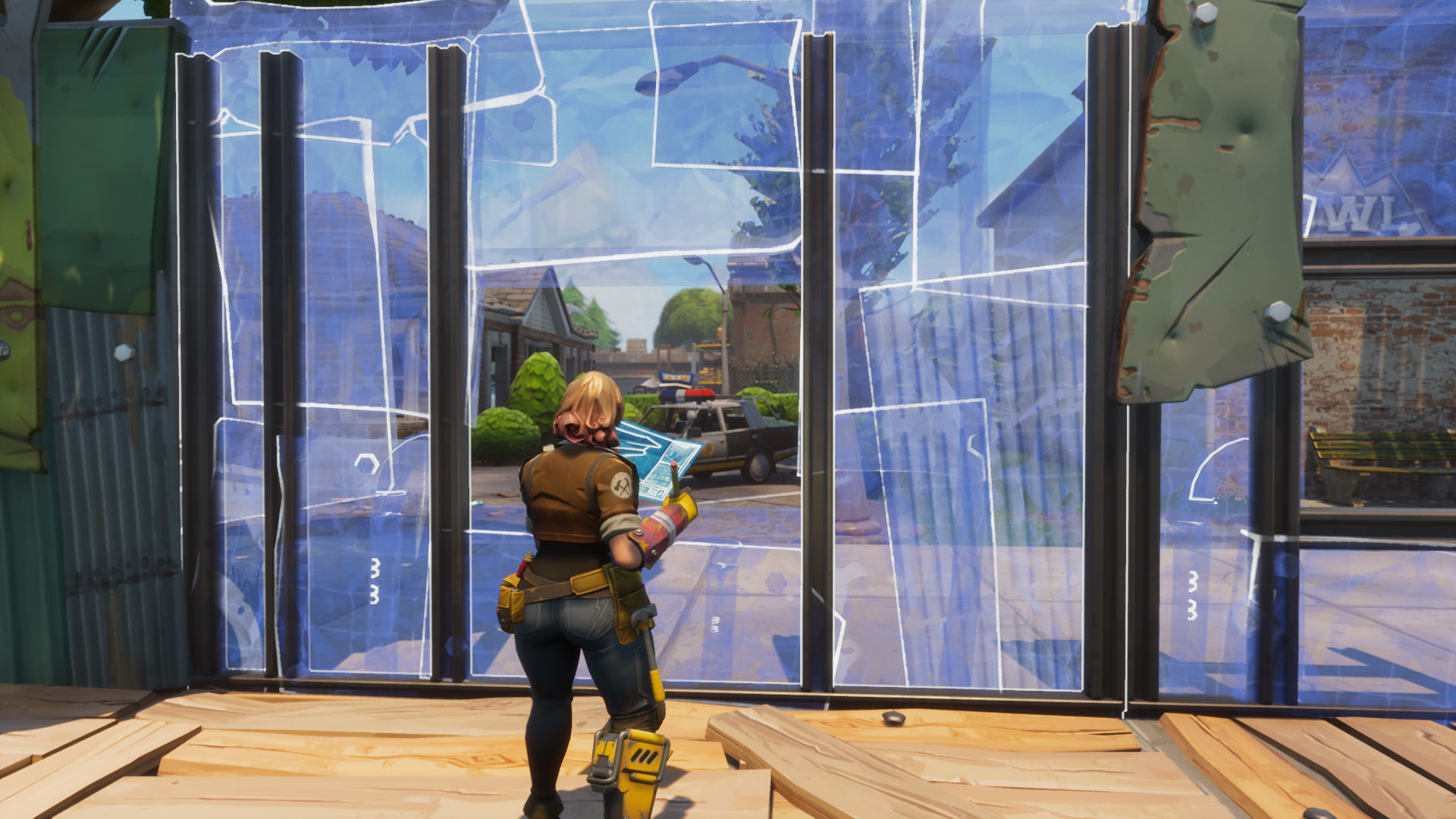 As effective as your fort can be, nothing beats good old fashioned guns, melee objects, and devious traps for dealing with your enemies. Fortnite's loot system is inspired by Diablo, so you can expect piles of goodies to play with, including different levels of rarity for each. Every weapon contains a name, level, and granular stats, such as damage, critical hit chance, critical hit damage, attack speed, durability, impact, range, and lots of others. There are bazookas, two-handed axes, futuristic sniper rifles, assault guns, and just about everything you can shake a stick at. For traps, there are spikes, darts, and even versions that can send monsters flying (towards a cliff, for example).

Plus, you can also collect and recruit Defenders: NPC's who serve as fire support, tipping the odds in your favor when the going gets tough. And the going will get tough. Swaths of monsters with specialized abilities will accost you from all angles. Some, such as the cannon-fodder Husks, will charge in hordes and attempt to overwhelm you with sheer numbers, while others will leap on top of your fort, doing their best to surprise and harass you from unexpected angles. Then there are the Smashers: enormous, mythic beasts who can rip through your defenses like paper. You'll need coordinated, sustained fire to take them out before they do too much damage. 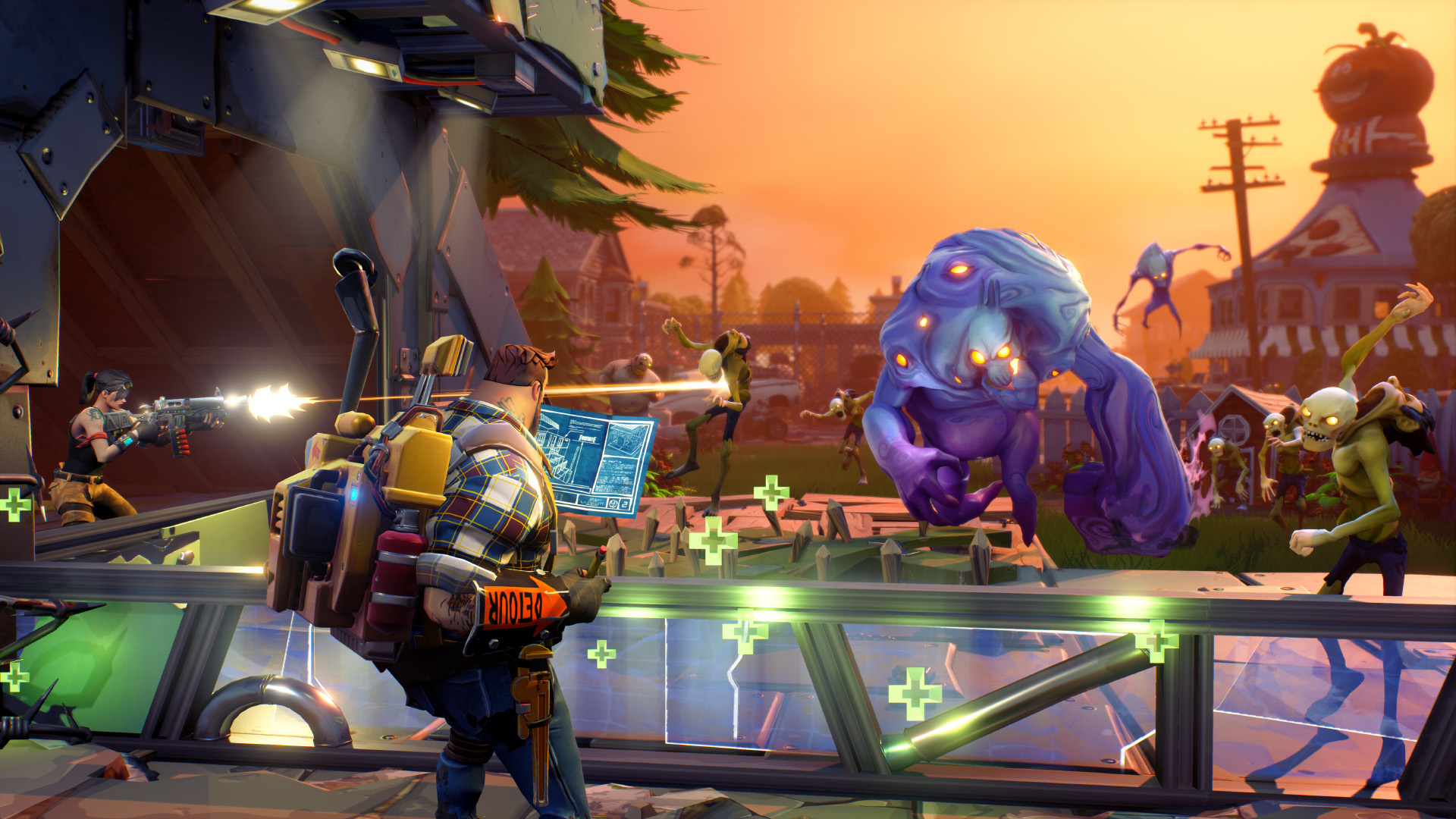 Being an action shooter, Fortnite is best experienced at 60 frames per second or above, and with GeForce GTX 10-Series GPUs you can often do that with max settings, too. At 1920x1080, the GeForce GTX 1060 is the GPU of choice, blistering past the 60 FPS mark in our testing. At 2560x1440, GeForce GTX 1070 is recommended, and at 3840x2160 only a GeForce GTX 1080 Ti will suffice, though you will have to slightly lower the detail level of some settings to maintain a solid 60 FPS.

Whichever GPU you choose to shoot with in Fortnite, GeForce Experience can provide one-click Optimal Playable Settings to instantly get you into the game with the best possible graphics for your system. In addition, you can use GeForce Experience to record and upload all your best moments, to stream matches, and to capture and share screenshots. And from within GeForce Experience you can also download the Fortnite Game Ready driver for an optimized experience in Epic’s new game and many other top titles.

You can purchase Founder Packs now to get into Fortnite's Early Access through the Epic Games Launcher, resulting in some sweet exclusive items and in-game events. Additionally, Epic Games is aiming to make the title free-to-play in 2018. You can also expect Fortnite to build itself even more over time based off community input, with new heroes and monsters, extra traps and weapons, and overall expanded features. If you've got an affinity for constructing amazing forts and defending them against monsters—and really, who doesn't—Fortnite is the perfect prescription.