Stay alive. That's your goal. The alternate world you've entered in Metal Gear Survive is anything but welcoming — one wrong step or one bad decision can mean disaster. Scrounge for food, seek out clean water, fashion weapons, conserve your ammo, and build defenses to guard against waves of the grossly deformed Wanderers.

Built on the same Fox Engine as Metal Gear Solid V: The Phantom Pain, Metal Gear Survive has you playing as a soldier in service of Big Boss in 1975, stationed at Mother Base. Things are pretty much business as usual until an XOF strike force launches a sneak attack on the facility. Mother Base crumbles, and Big Boss escapes, but soon after the incident a terrifying wormhole erupts into existence, vacuuming up the remaining soldiers and crumbled equipment. You manage to avoid getting sucked in, only to awaken in a clandestine research outpost, where you're forced to enter the wormhole. On the other side lies a nightmare—a twisted parody of the normal world wrought with peril. You'll need to forge alliances with other survivors and figure out a way home. 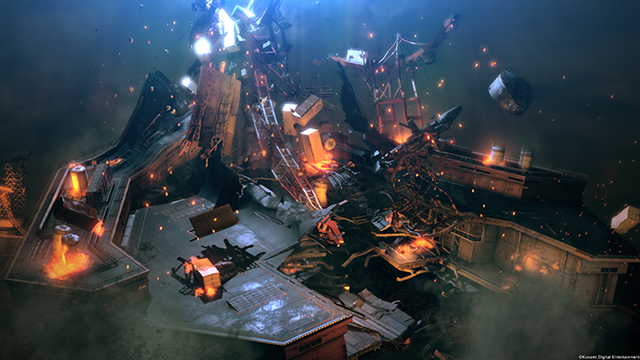 There are two distinct modes in Metal Gear Survive: single-player and co-op. In single-player, keeping yourself healthy and staving off hunger and thirst are paramount. When you begin, you'll notice the remains of a rough base camp. This will be your safe haven throughout the game, where you'll craft everything you need, from powerful weapons to important healing supplies, to vehicles and food.

Throughout your campaign, you'll discover other survivors, who you'll recruit to your side. The base camp serves as your crew's hub, and the more people you corral, the more defensible and mighty your base camp will be. Over time, you'll build up and reinforce the base camp with walls, fortifications, and other structures that create food and water, advanced weapons, ammunition, and thwart invading creatures. 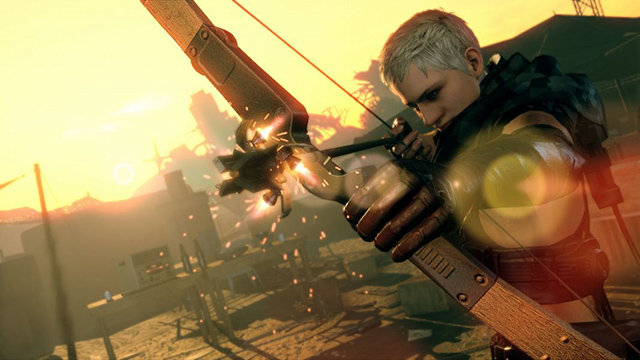 Upon leaving your base camp, you'll quickly discover that a strange and hazardous mist enshrouds pockets of the entire world. You're not quite sure where it came from, but what you do know is that breathing in the mist is very bad idea. With a cobbled together oxygen tank and respirator, you can venture through the mist unharmed, but you'll need to keep a close eye on your O2 gauge, or you'll find yourself in dire straits.

It might seem like a wise choice to avoid the mist, but there are plenty of materials and vital info you'll want to harvest inside. Expeditions into the mist will become a recurring theme, with a notable high-risk/high-reward dynamic. But battling creatures within the mist depletes precious oxygen, and long, drawn out fights can sap your supplies. That's where the Metal Gear series' classic stealth component comes into play — it's always advantageous to sneak around adversaries, avoiding conflict altogether, enabling you to explorer deeper into the mist. Of course, even your best attempts at stealth can fail, and when they do you'll find yourself face-to-face with different varieties of monsters, each of them entirely hostile. 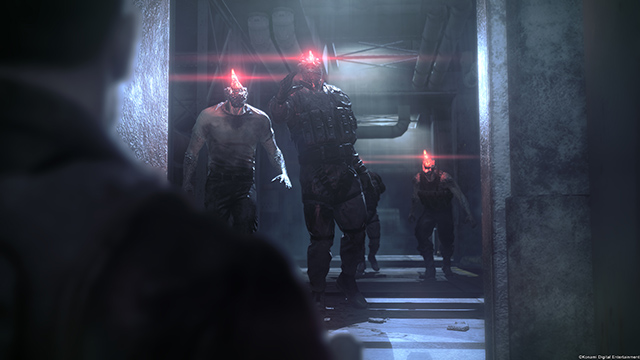 Meanwhile, in the game's four-person co-op mode, you'll put together a team of friends or matchmade players to tackle a variety of challenging missions, whilst simultaneously defending your base. The rewards for beating these missions are mighty, but it'll take some finesse and planning to execute them properly. In particular, you'll need to split your team and resources, to ensure the base is defended while tackling missions elsewhere. 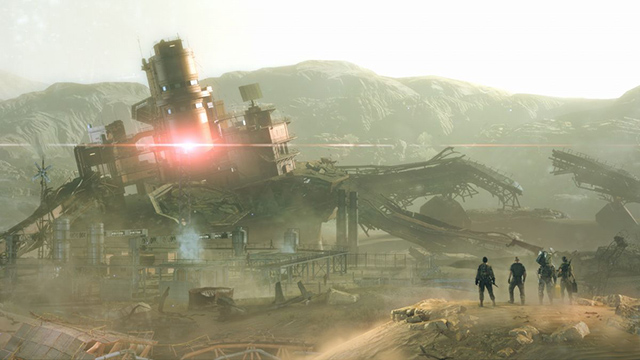 But don't worry, a lone warrior is deadly, even in co-op, thanks to interceptor units, traps, and defensive units, such as machine guns, turrets, and mortars, which can cut down swathes of opponents like grass. 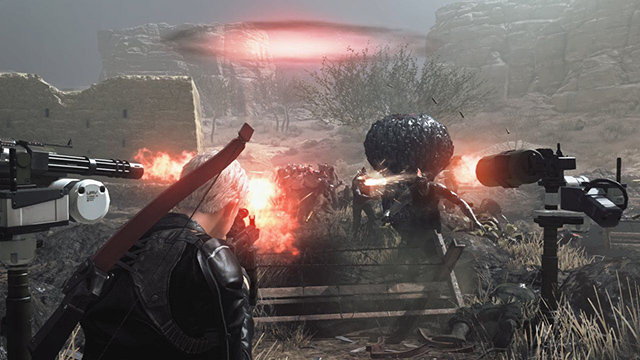 While single-player and co-op have different objectives and game styles, progress from one mode carries over into the other, so you can use recipes won as rewards in co-op for your single-player endeavors, or use weapons and items discovered in single-player for your co-op missions. Spend all your time in one mode or the other, or split your enjoyment between them equally—it's all up to you. 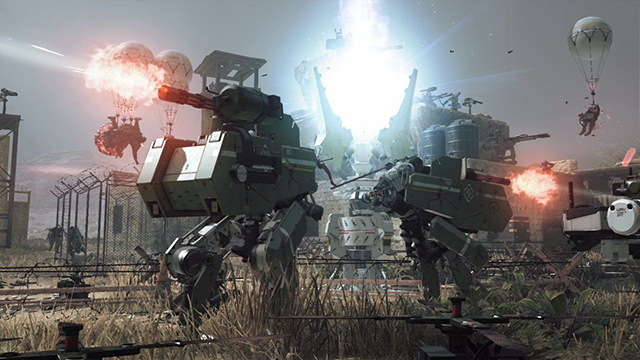 However you choose to play, your best moments will be automatically captured thanks to ShadowPlay Highlights, which will record and save kills, stealth kills, deaths, mission completions, and eight other actions in Metal Gear Survive. When you've finished playing for the day, review your Highlights, and select which to save, and which to upload to YouTube, Facebook, and other services. 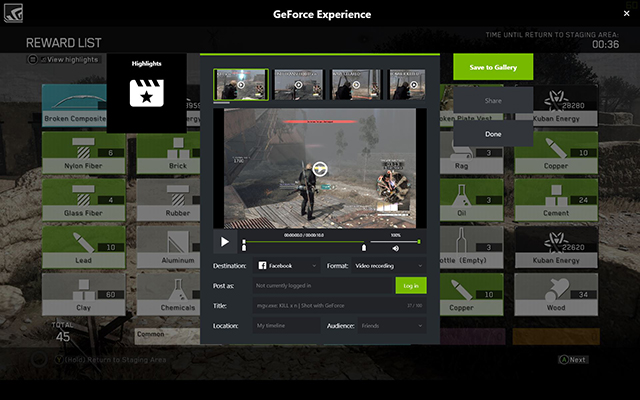 To use ShadowPlay Highlights in Metal Gear Survive, download and install the latest version of GeForce Experience from the app or our website, and our latest Game Ready driver. Then simply load the game and click "Yes" on the on-screen Highlights message.

If you're itching to dive in to Metal Gear Survive, you may be interested to know that the PC edition has a couple of graphical enhancements, in addition to being able to run at true 4K at 60 FPS+ (more on that later). Most noticeably, the PC edition has vastly improved ambient occlusion shadowing, resulting in a greater sense of depth and detail on objects, as demonstrated by the interactive comparison below. 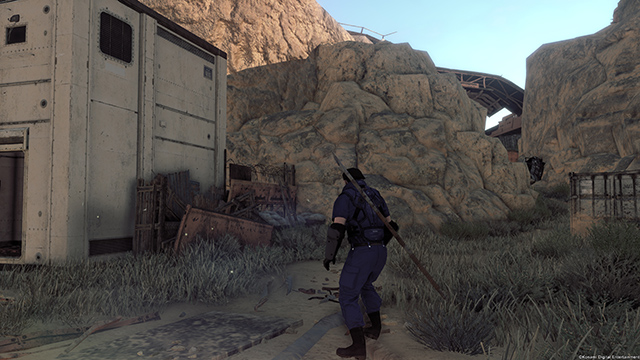 To make the extent of the enhancement even clearer, we can switch Metal Gear Survive to a view where only ambient occlusion shadows are rendered: 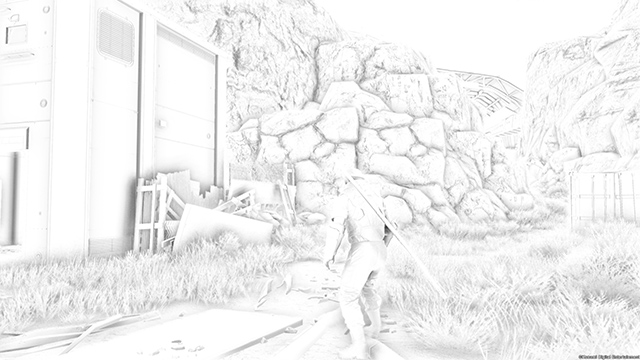 Elsewhere in the game, Konami has cranked up the quality of their newly-implemented God Rays, which are most visible when exploring the mist. On the PC, these shafts of light are rendered at a significantly-higher resolution, greatly boosting their visibility and fidelity, further enhancing image quality and the creepy, otherworldly vibe of misty areas. For an example, check out the interactive comparison below. 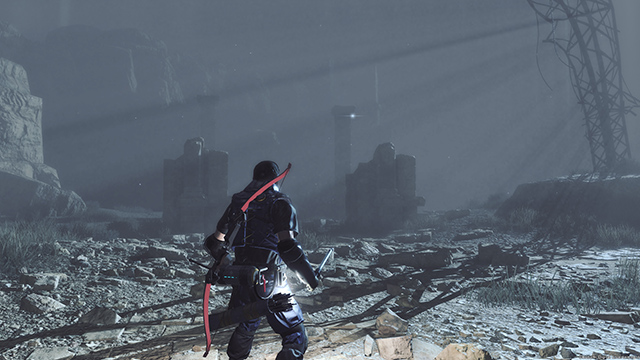 If you wish to experience Metal Gear Survive with the eye-candy enabled, you'll need the right hardware, and to determine what that is we put the game through its paces in our test lab. 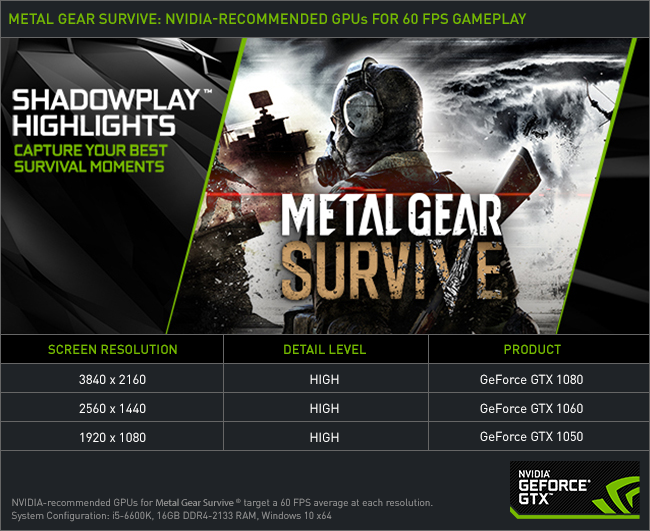 If you have or buy a super speedy PC that's constantly hitting the game's 60 FPS cap, you can easily disable the cap, without issue, by opening C:\Program Files (x86)\Steam\userdata\youruserid\543900\local\SSD_GRAPHICS_CONFIG and changing the line "framerate_control" : "Auto", to "framerate_control" : "Variable", before saving the file.

With a GeForce GTX 10-Series graphics card, Metal Gear Survive is a treat on the PC. You'll have highest-fidelity graphics possible, the best levels of performance, and game-enhancing technologies like ShadowPlay Highlights, G-SYNC, and GameStream. To see for yourself, play the open beta this weekend – if you like what you see and can't wait to jump back in and sneak-stab some freaky enemies, head on over to Metal Gear Survive's Steam page and pre-order. Or wait for reviews ahead of the game's February 21st, 4pm PT launch.