An asteroid has annihilated 80% of the earth’s population, and humanity’s numbers are dwindling. Ruthless and bloodthirsty gangs roam the open roads and the tyrannical Authority seek to rule with an iron fist. As Walker, the last Ranger of the wasteland and a threat to their power, you have been robbed of your home and left for dead. Now you’ll have to rage for justice and freedom. With ludicrous vehicle combat, super-powered first-person mayhem, and an open world full of emergent madness, you will tear across an unforgiving wasteland battling sadistic gangs to find the tools and tech needed to crush the oppressive rule of The Authority once and for all.

To ensure the explosive action of the Vulkan-powered Rage 2 runs at its very best when Avalanche Studios, id Software and Bethesda Softworks’ first-person shooter launches May 14th, download and install our new Game Ready Driver.

For an optimized experience in the game’s massive battles, download and install the new Game Ready Driver.

In each driver release we’re introducing optimizations and improvements for the games you’re still playing. Following double-digit improvements in our previous Game Ready Driver for Strange Brigade, we’re now improving performance by up to 18% in the recently-released World War Z: 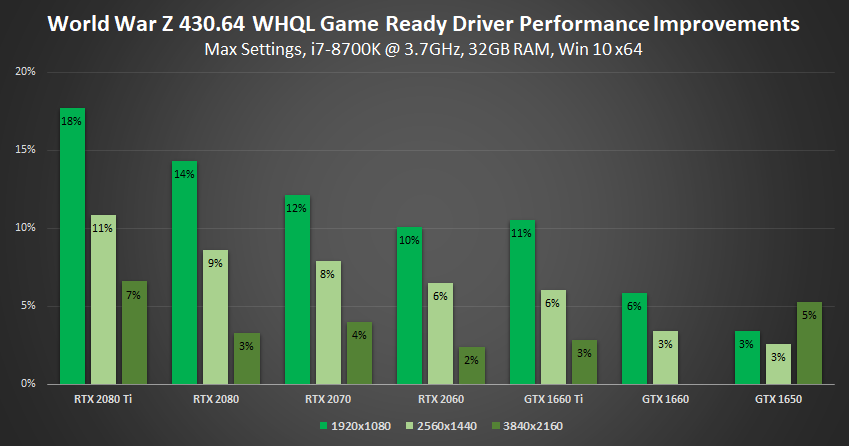 You can download the new GeForce Game Ready 430.64 WHQL drivers through GeForce Experience, our free, game-enhancing application, which records and streams gameplay.