Microsoft and Rare’s Sea of Thieves is an absolute blast to play (especially with friends in co-op), having you sail across treacherous seas to steal treasure and swashbuckle your way to victory against hundreds of online opponents. Already, 352,000 gamers spent over 2 million hours pirating and plundering in a recent closed beta, and anticipation for the final version is now growing rapidly ahead of its March 20th release. 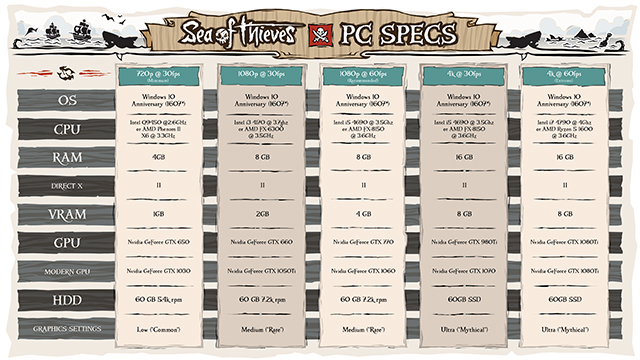 As the extensive and fantastically-detailed specs reveal, a GeForce GTX 1060 will enable you to play Sea of Thieves at a solid 60 FPS at 1920x1080, with faster cards enabling hi-res and high framerate gameplay at a variety of different resolutions and graphics presets. However, for the full 4K 60 FPS experience, you’ll need the world’s fastest consumer GPU, the GeForce GTX 1080 Ti.

If you’re intending to take up the life of a pirate on March 20th, be sure to check GeForce Experience and GeForce.com shortly before that time for our Sea of Thieves Game Ready driver, which will ensure you receive the best experience possible.