Out now is an update for Shadow of the Tomb Raider, adding highly-detailed ray-traced shadows, and DLSS.

The addition of ray tracing enhances Shadow of the Tomb Raider’s environments, improving the fidelity, detail and appearance of shadows across the entire game.

Compared to traditional shadow mapping techniques, ray-traced shadows have realistic penumbras, translucency, self-shadowing, and other benefits, creating contact-hardened, smooth shadows that would otherwise be impossible to render in real-time.

The result is five new types of ray-traced shadows:

Point Lights are used for smaller light sources, like candles and light bulbs, that illuminate their immediate surroundings. With the power and accuracy of ray tracing, we’re enabling these Point Lights to cast shadows, adding extra detail and realism to scenes. 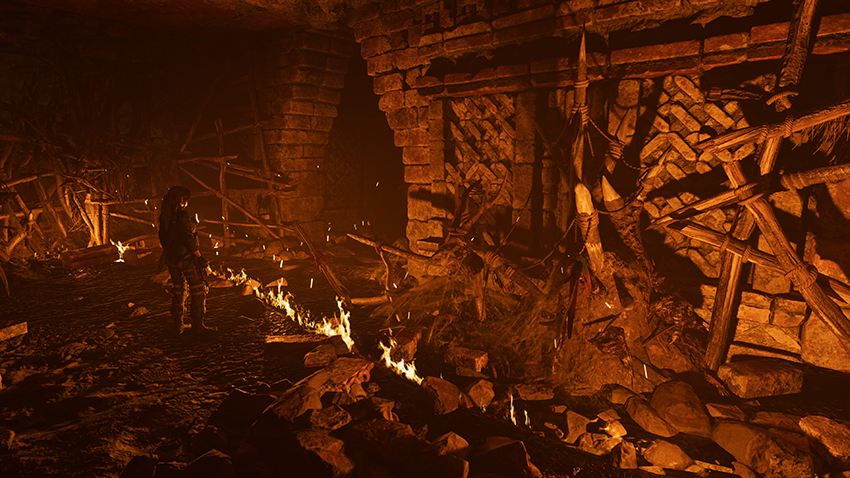 With Ray Tracing enabled, flames splash the wall with pole shadows, which are appropriately hard due to their close proximity. Debris is shadowed with fine detail, and long shadows crawl from Lara’s feet, improving the look, feel and mood of the scene 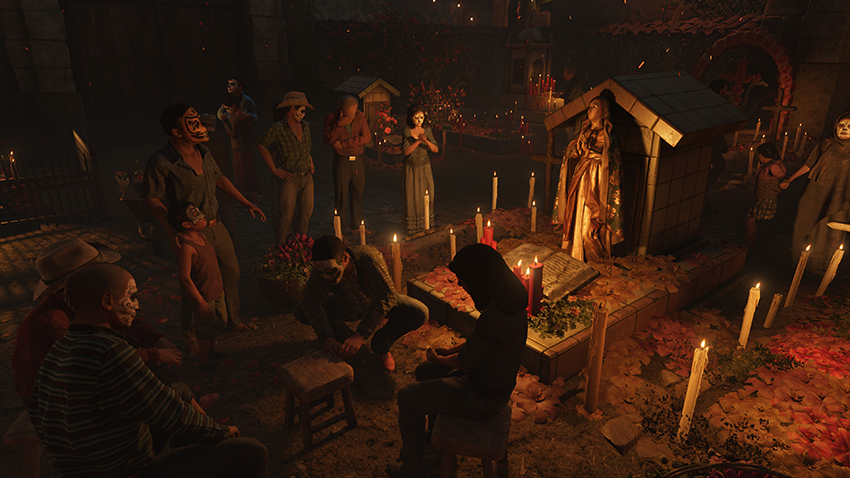 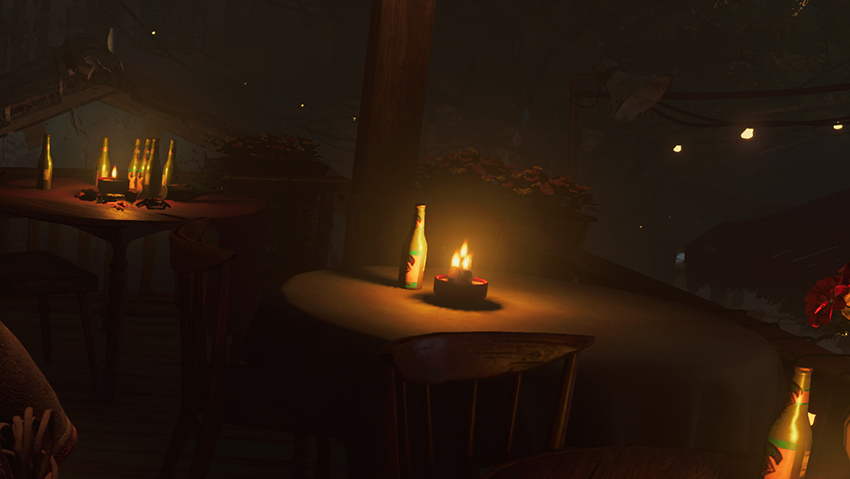 Ray-Traced Point Lights also enhance the look and feel of specific scenes, and add accurate shadows. In the cemetary scene, point light candles illuminate the statue and cast its shadow with proper penumbra, the kneeling man’s forward knee casts a shadow and the penumbra of his body’s shadow blurs into the distance, and there’s accurate shadowing around the statue’s base

Whereas point lights are just single, omni-directional lights, area lights, such as the neon sign shown below, are directional spotlights emitting light across a sizeable portion of a scene. By giving them the ray-traced treatment, the quality and accuracy of shadows are increased, most noticeably in the game’s earlier city-based segments. 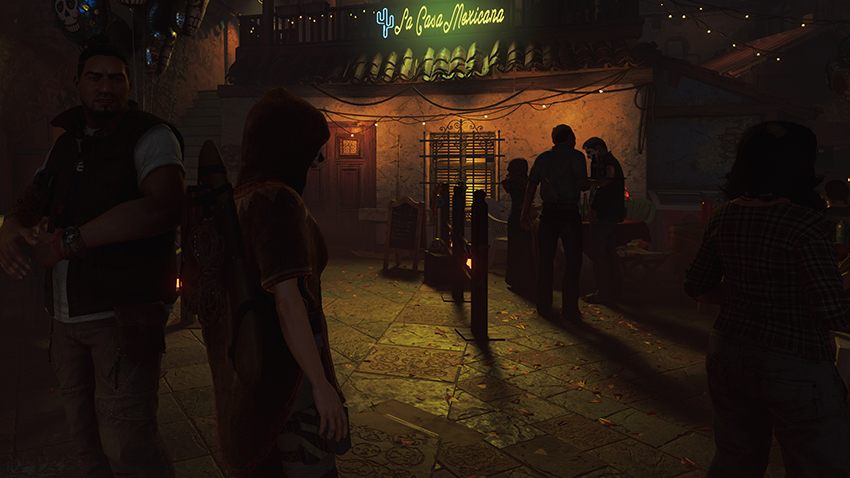 Spot lights are directional lights that emit light in the shape of a cone, as seen on flashlights and street lights. As with the other shadow types, upgrading them with ray tracing results in the addition of even more shadows with realistic penumbras, and improved detail that matches the shadow caster. 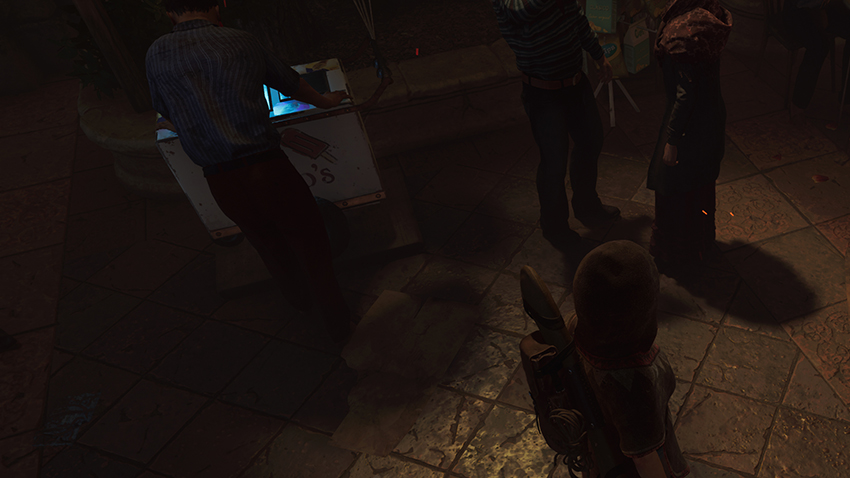 When Lara’s taking a break from tomb raiding, she spends a considerable amount of time in sunny jungles and ancient cities, so we ensured that any shadow cast by sunlight was also enhanced. 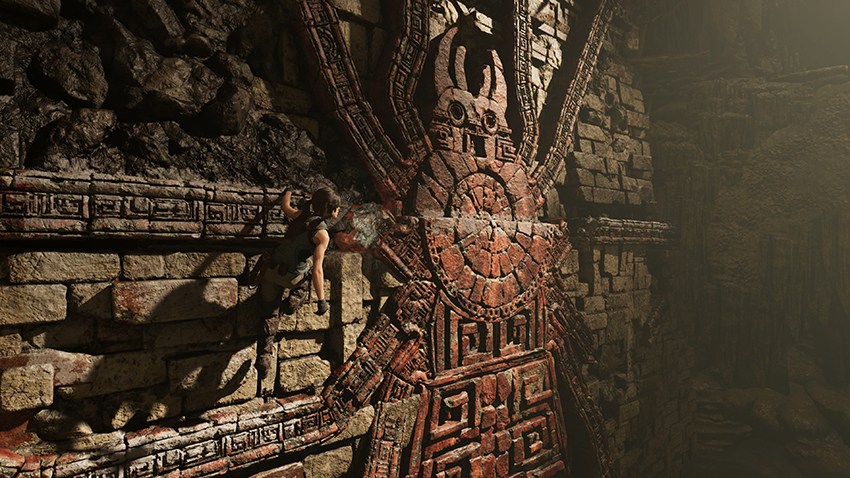 Ray-Traced Sunlight Shadows add depth to numerous scenes like this, accentuating the depth and detail of models, surfaces, and the environment in general. In this example, Lara’s shadow penumbra is harder the closer it is to her body, and softer as it spreads across the wall. Fine brick detail is also shadowed, and the deep grout joints are darker than surface detail. The result is a texture that pops with true depth information 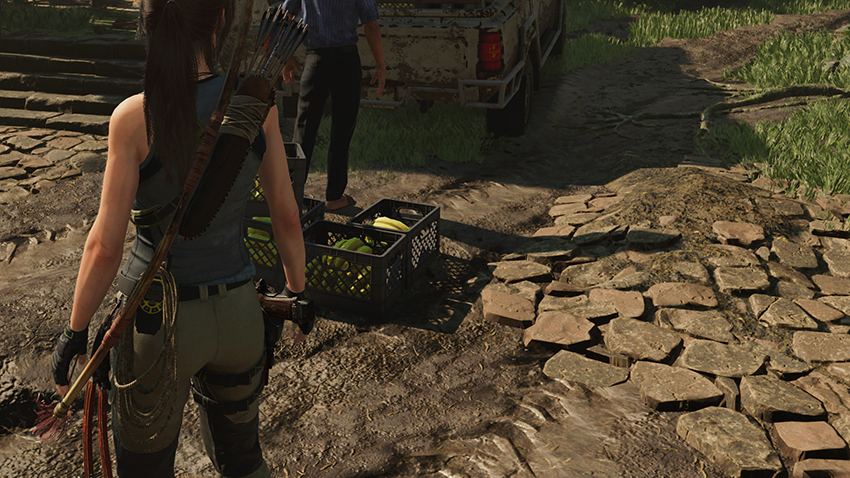 Ray tracing’s precision enables the rendering of exquisitely-detailed shadows on even the smallest and most-detailed of objects and surfaces, as exemplified by this comparison

Bright light can permeate across and travel through sufficiently translucent objects, whether those be glass windows, a hand or ear, or in the case of Shadow of the Tomb Raider, the environment’s foliage. By utilizing ray tracing, we can account for this, and accordingly brighten and darken shadows through up to three layers of foliage, further improving detail, fidelity, and realism. 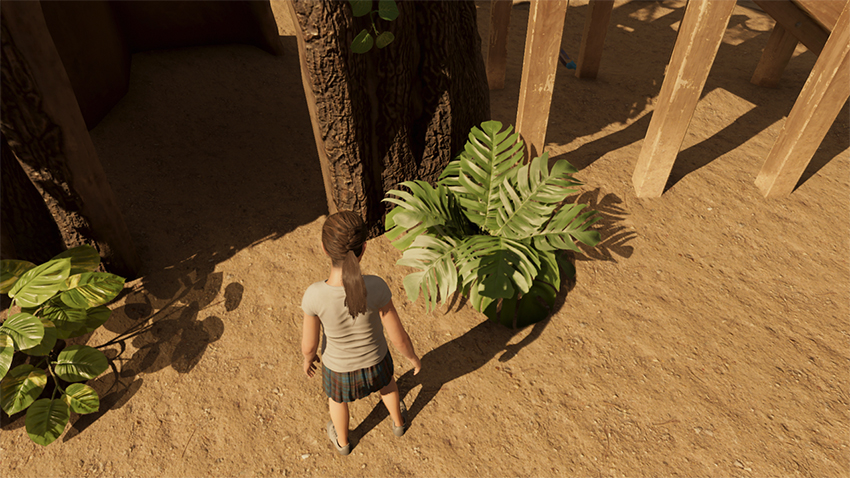 Translucent Ray-Traced shadows are a subtle-but-important step towards achieving photorealistic rendering in games. In this image, note the overlapping shadows on the ground on the left of the image, and the varying darkness of shadows on the plant in the middle

To switch-on ray tracing, select “Ray Traced Shadow Quality” on the Video > Graphics options screen. In the menu, you’ll find three detail levels available to choose from --Medium, High, and Ultra-- with each successive option enabling more of the game-enhancing tech detailed above.

The Ultra setting is intended for enthusiasts who wish to push systems beyond the capabilities of today’s hardware, so we therefore recommend High for the best tradeoff of image quality and performance. The medium setting enables point light shadows that are noticeable in the game’s earlier city-based segments. To see what’s enabled at each detail level, check out the chart below:

DLSS helps the most when the GPU is under maximum load and is available for the following settings:

Our supercomputer never sleeps, and we continue to train and improve our deep learning neural network even after a game’s launch. When we have improvements to performance or image quality ready, we provide them to you automatically via NVIDIA software updates.

To use DLSS and ray tracing in Shadow of the Tomb Raider on GeForce RTX GPUs: 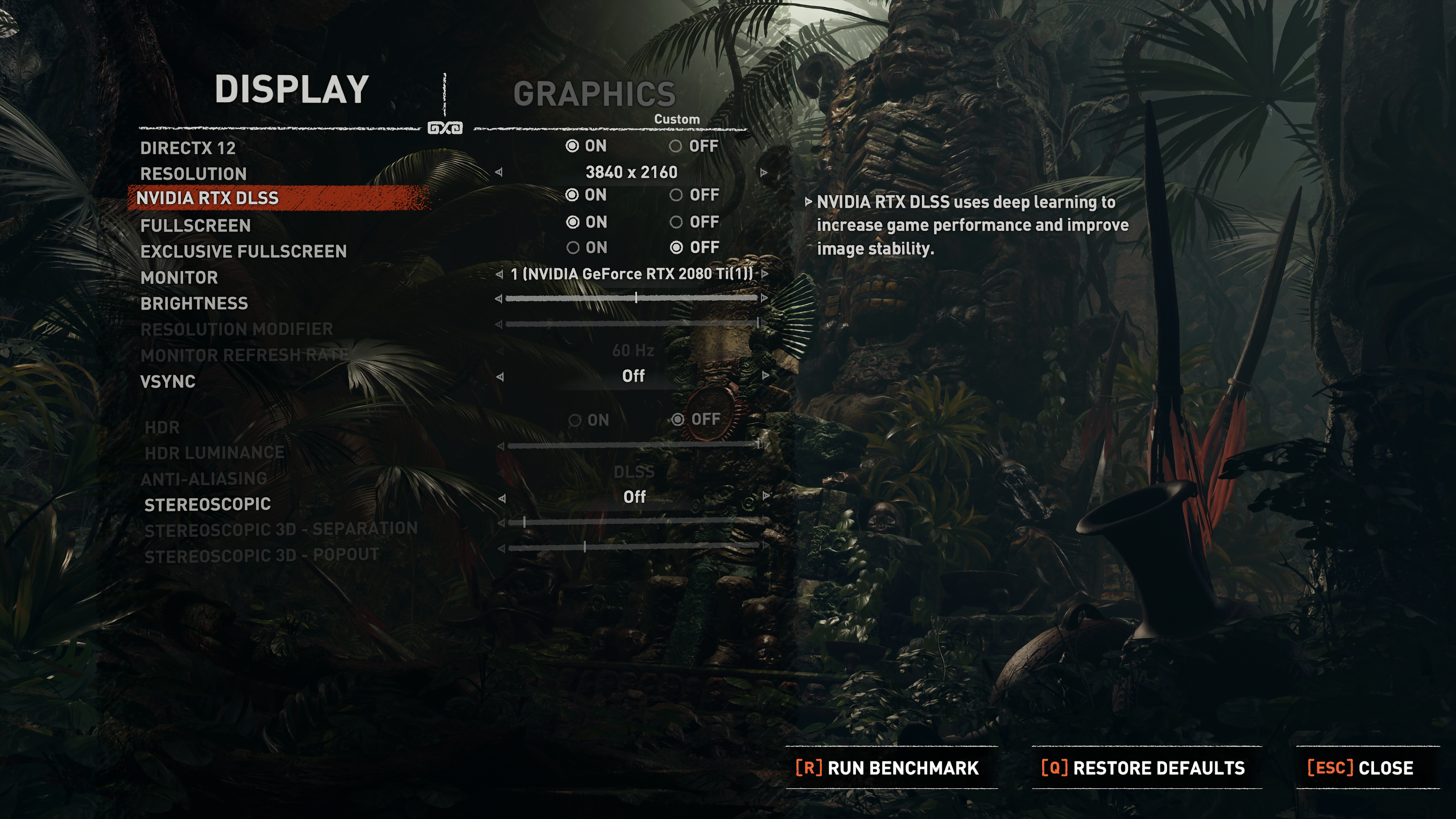 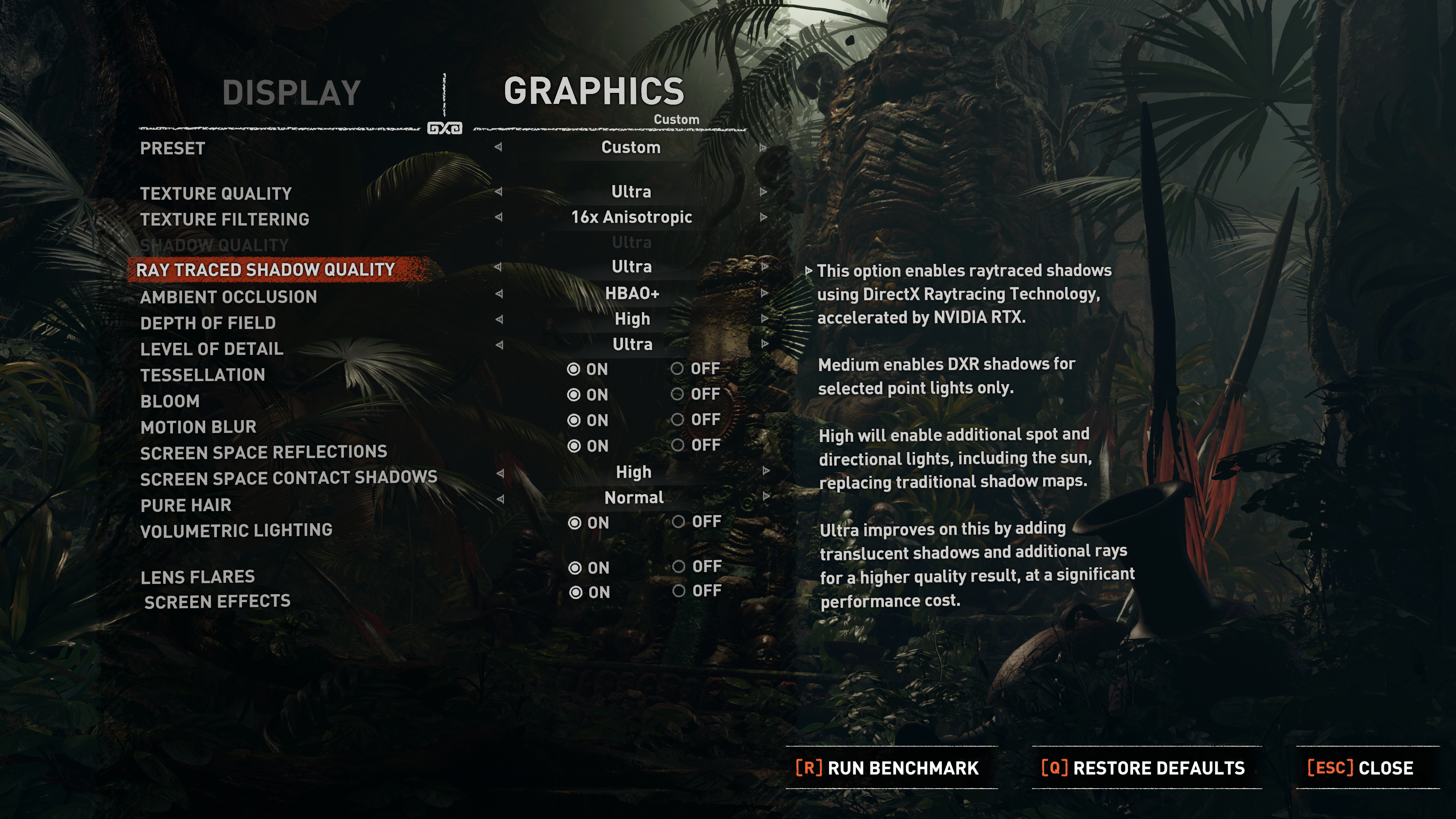 In our testing, the following combination settings deliver fast, smooth Shadow of the Tomb Raider gameplay:

For more RTX announcements, check out our GDC 2019 articles, and stay tuned to GeForce.com.

If you have any comments or questions about the addition of RTX to Shadow of the Tomb Raider, please share them here or in our forums.