Game photography is undeniably a new art form - screenshots can be posed and framed, and those with a great eye will select the best scenes and most beautiful vistas, just as a real world photographer would. The very best screenshots from famous game photographers like Duncan Harris, James Pollock, Leonardo Sang and Joshua Taylor are shown in exhibitions, printed and framed, and admired by millions of gamers online. 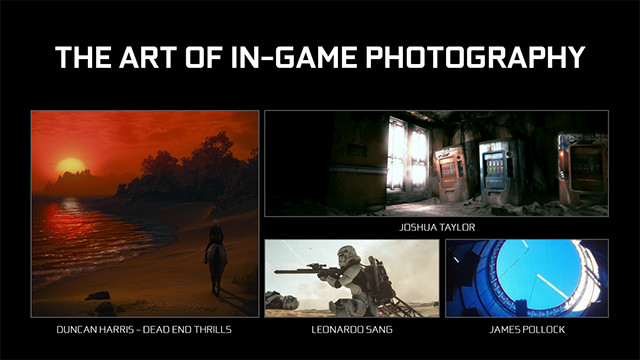 Many of us would love to take similar screenshots, and try as we might we simply can't work around the limitations of traditional game capture - views and camera angles can't be changed, enemies continue to attack, and you can only capture a generic shot with the HUD visible. 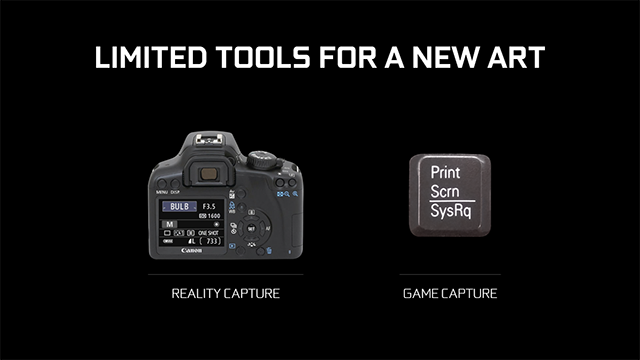 Professional game photographers are able to overcome these limitations with exclusive access to developers' internal game builds, custom tools built specially for their work, and the very best computer hardware.

An example of the tools and processes Dead End Thrills uses to create his stunning screenshots, which have in the past been printed and displayed at art exhibitions.

That changes now however with the introduction of NVIDIA Ansel, a revolutionary, accessible game capture tool built in cooperation with leading game developers.

Simply put, Ansel enables you to make and capture your own unique and personally-framed screenshots via an easy-to-use user interface, on NVIDIA GeForce GTX graphics cards. 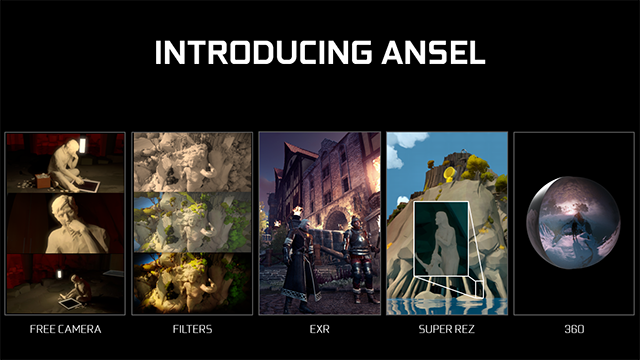 Within Ansel there are numerous functions, features and modes, detailed below, that help you take amazing screenshots.

Free Camera - Compose Your Shot, Anywhere, From Any Angle

Start your game photography career by activating Ansel, at which time the game will be paused, and a freecam enabled, allowing you to compose your scene and take unlimited high-quality shots until you achieve that perfect image. In other words, you can escape the confines of a game’s first or third person camera and take a screenshot from any angle, until you have the perfect shot.

Roll, zoom, and reposition - do whatever you like to achieve the perfect game photo that real-life photographers may only get once in a lifetime. With this functionality Ansel instantly overcomes the limitations of traditional game capture, enabling you to capture any type of screenshot you can imagine. 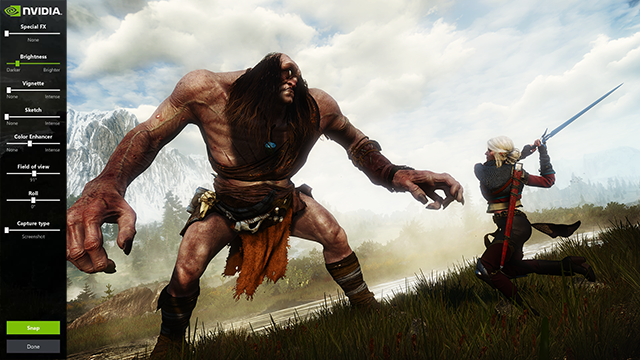 Game developers, of course, will have the ability to restrict camera movement in multi-player games so Ansel users don’t gain an unfair advantage through use of the feature.

Once you’ve positioned and framed your shot, simply select “High Resolution” in the Ansel in-game overlay and you can capture screenshots tens of thousands of pixels in size. Ordinarily this would be impossible given the resources required to capture such a high resolution screenshot, but by using the CUDA Cores present on NVIDIA GeForce GTX GPUs we can render and save these screenshots with ease via an in-game overlay.

These super resolution screenshots can be viewed in Irfanview and other applications, and shared online via file sharing sites, forums, or any other service that supports the uploading of large files.

But why would you want to capture screenshots at super resolutions tens of thousands of pixels in size? Well, the resulting screenshot is almost entirely free of aliasing, detail is significantly sharper and clear, crops of any part of the screenshot are at maximum fidelity levels, and screenshots can be downsampled to lower resolutions for wall prints, posters, or super high-quality desktop wallpapers.

By saving at such a high resolution you can view incredible amounts of detail in games - take The Witcher 3: Wild Hunt screenshot below, for instance. In that image, Geralt of Rivia’s eye is less than a pixel in size, yet we can zoom in and see his eye and entire face in full detail. Below Geralt is another room that players pass through at the start of the game - by zooming in there we can read the words in the books in full detail. 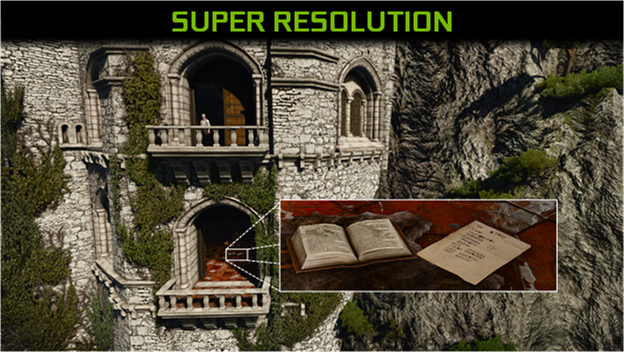 Post-Process Filters - Adjust The Look & Mood Of Your Favorite Games

If you want to tweak the look, feel and mood of your screenshot before saving, Ansel includes brightness, vignette, sketch, color enhancer, and special FX options for tweaking the image. Moreover, Ansel allows users to create and share their own special FX filters, as they currently do for ReShade and other post-process applications.

If you're equipped with a HDR TV or monitor, you can export Ansel screenshots in the OpenEXR format, enabling you to view High Dynamic Range Super Resolution screenshots at the highest possible fidelity.

Alternatively, export in OpenEXR to enable in-depth Photoshopping - great for users who wish to further adjust the look of their screenshot captures.

360 degree video, Google Cardboard, and Virtual Reality are all in the news right now - 360 degree film and photo capture solutions are being sold by leading firms, and the results enjoyed by millions of people on YouTube, Google Photos, and other services. Additionally, there are tens of millions of high resolution phones are compatible with Google's entry-level Google Cardboard VR solution, and Virtual Reality headsets from HTC, Oculus VR and Samsung are all on sale.

With Ansel you can create screenshots for these services and devices, with full 360 degree stereo views - simply select the 360゜ you wish to use in Ansel, and follow the instructions on our NVIDIA Ansel technology page to share and view the images on the web, in Google Cardboard, and in Virtual Reality headsets. It's that easy.

For Cardboard users, we've released the NVIDIA VR Viewer bundled with Ansel 360 Capture screenshots that you can view today. Download the app and check it out! 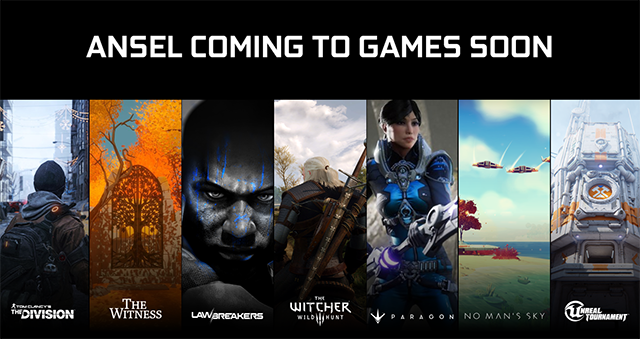 Show your creativity, your humor, your sense of style, and maybe even become the next professional game photographer, wowing the world with stunningly composed screenshots worthy of display in an art gallery and on enthusiasts' walls.

Anything’s possible with Ansel, and it will all be available for GeForce GTX gamers.