Available in Early Access starting January 31st, Conan Exiles is an open-world survival, action, adventure, exploration, and crafting game based on the Conan lore written by Robert E. Howard. You can solo the game’s vast content via a local connection, or jump into the action in multiplayer on public and private servers, testing your mettle against human-controlled friends and adversaries, or simply cooperating to build incredible settlements and cities in a PvE environment.

Your character starts off crucified, slowly perishing under the harsh, Exiled Lands’ sun. Just before you succumb to death, Conan appears and cuts you down, but leaves you soon after to follow his own adventures. You then discover a serpent bracelet attached to your wrist. This rather odd piece of jewelry can’t be removed, and if you try to pass through the Cursewall—a magical barrier that surrounds the Exiled Lands—it’ll kill you. You need to discover who forced this bracelet upon you, why you’ve been exiled to begin with, and why you weren’t immediately executed rather than hung up to rot over time.

While Funcom celebrates the game as full of exploration, player-freedom, and non-scripted moments, they also point out that Conan Exiles isn’t merely an empty sandbox. Conversely, it’s full of narrative lore and intrigue, and there’s a lot of fascinating story brimming under its surface. In terms of lore, the game takes place between Conan stories Xuthal of the Dusk (The Slithering Shadow) and A Witch Shall be Born. 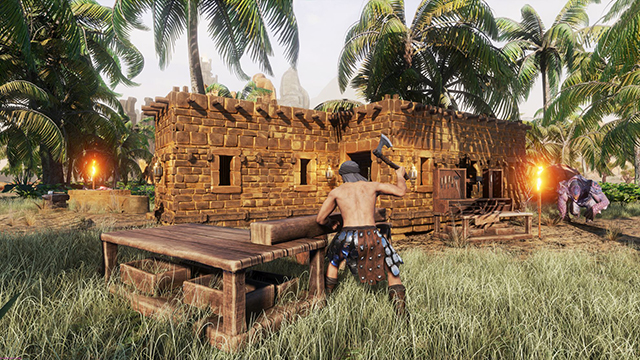 To build yourself up as a powerful leader to be feared and respected, you’ll need to assert your dominance early on. You can take prisoners from defeated enemies and break them on the Wheel of Pain, converting them to your side to act as soldiers, entertainers, or crafters for your cause. And there are plenty of archaic gods to worship too, such as Set, Crom, Yog, and Mitra. To gain their favor, you can sacrifice beating hearts of captured foes on their altars, and eventually summon massive, near-unstoppable avatars to crush the opposition.

Combat is an integral part of Conan Exiles, but there’s a lot more to surviving than swordplay alone. You’ll have to seek out food and water on a regular basis, discover harvestable resources for building structures and fashioning weapons and tools, and to protect yourself from devastating sandstorms. And speaking of structures, the more you progress through the game, the more your living quarters will develop. Your domiciles will go from basic mud huts to stone-reinforced mini-palaces, and as time passes, you’ll raise your tiny, fledging settlement into a thriving city or stronghold, complete with a servile army ready to defend your territory at a moment’s notice. 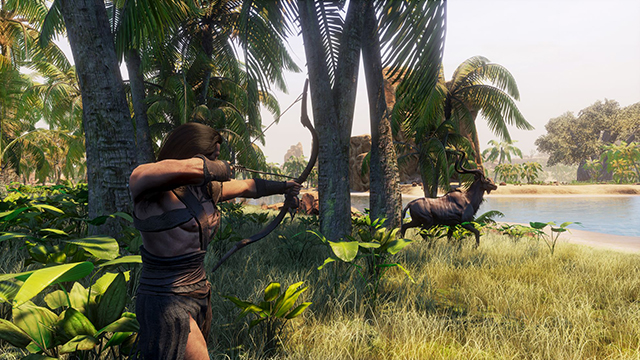 There are no character classes in Conan Exiles, and you’re encouraged to experiment with different weapons and tactics. It’s perfectly fine to focus on swords one moment, but then switch to axes or a bow and arrow in another. Similarly, while you get to choose a certain god at the game’s onset, you’re always free to worship any of the others at your leisure. The people of the Exiled Lands are fickle, and the more you take advantage of diversifying your skills, the better your character can adapt. This is especially true as you begin venturing out to uncover enigmatic ruins, which can contain both lucrative treasure and corrupting knowledge. Your enemies come in all sorts of shapes and sizes as well, ranging from savage cannibals to fantastical monsters. Fights are often bloody and brutal (as evidenced by the gobs of gore spattering across your screen), and it’s not uncommon to see arms and heads go flying too, keeping the game true to the Conan novels. 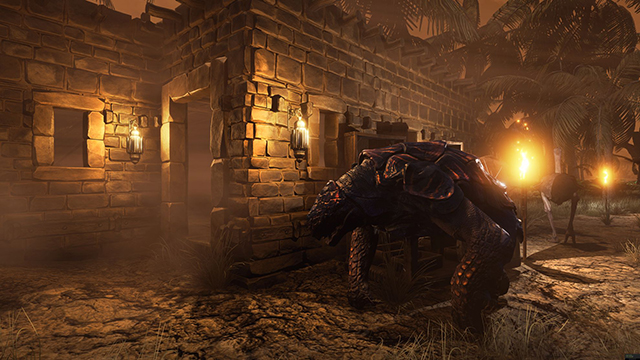 There are many ways to tackle Conan Exiles, depending on your tastes. You can host a local game with friends who’ll connect directly to your session, or you can forego the social element entirely and go solo. On the other hand, you can also take part in an online server hosted by Funcom, where all sorts of other players will lust for power and glory. If you’d like to create your own unique Conan Exiles instance complete with custom rules and settings, you can make a dedicated server, either through utilizing your own equipment, or renting server space from the game’s partner PingPerfect. And there are myriad options to adjust as a server admin, such as PvP, god-avatar settings, sandstorm behaviors, day and night cycles, loot penalties for players dying, and loads more. For the truly nefarious or creative, you can even spawn monsters and items wherever you see fit, and turn yourself invincible.

In addition, the PC version of Conan Exiles offers some awesome extras, such as universal mod support right from the get-go. With the available tools skilled players can hand-fashion new enemies, new items, and lots of new gameplay elements, and offer them via the Steam Workshop for other players to use in their servers and solo instances.

Furthermore, by playing Conan Exiles on the PC you’ll have rapid Steam updates, access to higher resolutions, higher-quality textures and effects, and adjustable graphics settings. And with a GeForce GTX PC or laptop, you’ll be able to automatically configure those settings for optimum performance image quality using GeForce Experience.

Additionally, you can use GeForce Experience to quickly and easily install the Conan Exiles Game Ready drivers, and capture, stream and share gameplay using GeForce Experience Share – with one press of a keyboard shortcut you’ll be greeted by a user-friendly on-screen overlay, with options to record gameplay footage for later use (up to 4K at 130 Mbps), stream your progress to Facebook Live, YouTube Live, and Twitch, capture screenshots, and broadcast your exploits directly to a friend, or even join them for some co-op play in supported games. And even if your gaming rig isn’t brand new, Share has a minimal impact on performance, so you can run it without worry. 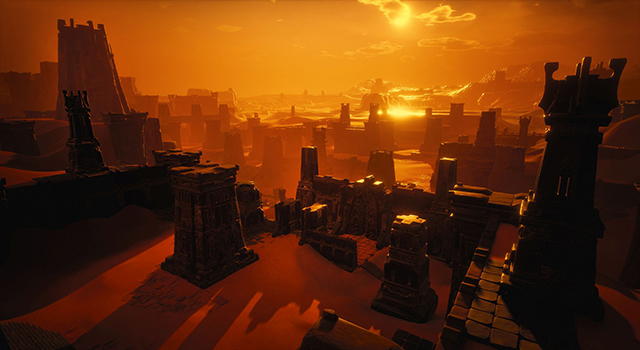 NVIDIA has also worked with developer Funcom to integrate NVIDIA Ansel, an amazing piece of technology that enables you to capture and share unique 2D, 360° and Virtual Reality 360° screenshots using an intuitive interface, a freecam, and several other tools. Saved images are accessible and can be shared via the aforementioned Share interface, and from there can be uploaded straight to Facebook, Google Photos, and Imgur, showcasing your work to the world. Once shared they can be viewed on web and mobile services, and in VR and in 360° on VR headsets and smartphones. Check out some examples here. 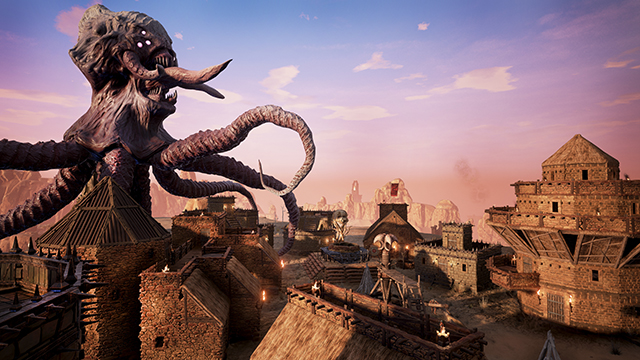 To experience Conan Exiles in all its splendor, Funcom recommends gamers gear up with a GeForce GTX 1070, which runs the game on Ultra when paired with a modern CPU. For the slightly less demanding High graphics, a GeForce GTX 1060, or an equivalent previous-generation GPU, is recommended. For the complete specs, take a look below.

You can download Conan Exiles Early Access from Steam starting January 31st. For some in-depth insight on all the progress and behind-the-scenes work Funcom has accomplished to date, the game’s dev blog is a terrific resource. In the meantime, be sure to download and install the Conan Exiles Game Ready drivers to get your system ready for the game’s launch.