So we’re introducing a new Creator Ready Driver program to provide all creators the best performance and reliability when working with creative apps.

To achieve the highest level of reliability, Creator Ready Drivers undergo extensive testing against multiple revisions of the top creative apps. Whether you just updated to the latest release of your favorite creative app, or are still on the prior version, Creator Ready Drivers are fully tested. We also conduct exhaustive multi-app testing for each type of creative workflow, evaluating driver quality in the same manner that creators work day-to-day. Editing 4K video in Adobe Premiere CC then moving it to After Effects for post production visual effects then back to Premiere to render, an example of a video editor’s everyday task, is rigorously tested to ensure the best experience possible. 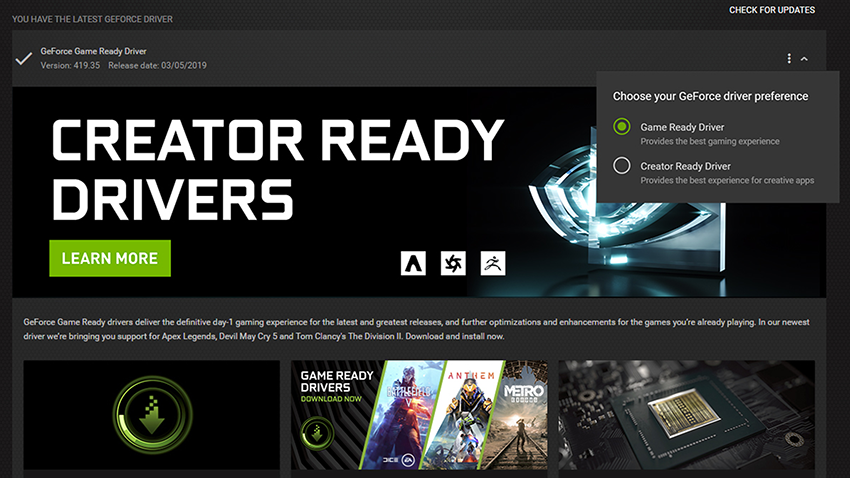 Switching your driver preference between Game Ready and Creator Ready Drivers is quick and simple. Within GeForce Experience, click the menu (three vertical dots in the top right corner) to reveal a toggle. Select your preference and that’s what you’ll download and install.

Best of all, you can get started today.

The first Creator Ready driver is available today and comes optimized for a number of exciting app updates featuring acceleration for NVIDIA RTX GPUs, including: