The Fallout series is a PC gaming staple, and its celebrated roots trace all the way back to 1997. Since then, numerous Fallout games have released, each one more detailed, gloriously violent, and inventive than the last. And now, for the first time ever, you can jump into the Fallout universe like never before, in the form of Fallout 4 VR on the HTC Vive. Created by Bethesda Game Studios, the award-winning title is playable from start to finish in its entirety in VR, and includes a revamped combat system with a new take on V.A.T.S., optimized crafting, and VR-friendly building controls and accessibility.

As the game starts off, you’re the only survivor of Vault 111: a supposed safe haven from a nuclear apocalypse that ravaged the globe ages ago. During your newfound awakening and journey through the wasteland, you’ll battle strange and exotic enemies, discover new factions and cultures that rose from the ashes, uncover long-buried secrets, and wield advanced technologies from a bygone era.

Jumping into Fallout 4 VR for the first time puts an amazing new perspective on the irradiated wasteland and its surrounding environments. “Feeling like you’re physically in the world of Fallout 4 by playing in VR is an amazing experience,” said Fallout 4 Producer Andrew Scharf. “All the way up to the sad moment when you remove the headset and realize there is no V.A.T.S. in real life.” And speaking of V.A.T.S.—Fallout 4’s location-based damage and aiming mechanic— the system has been reimagined for VR to make it feel more natural to the platform. “In Fallout 4, you queue up your shots and the V.A.T.S. camera plays out, which shows all the carnage,” said Scharf. “But that takes camera movement away from the player, and that sort of thing can make you feel pretty uncomfortable in VR. So what we do instead is slow down time, and then the player can teleport around or look around in real-time.” And just like the original game, the developers confirmed that you can still target specific body parts while time is slowed, and each area you aim at will glow, letting you know exactly where the shots will land.

The landscape of Fallout 4 VR is vast, and there are hundreds of quests, locations and characters to stumble across. There are also a plethora of weapons to handle, such as the ubiquitous assault rifle, the energy-based Laser Musket, the mini-nuke-hurling Fat Boy, and many more. Firing each of these guns in VR is a rewarding, tactile experience. Taking down a vampiric Bloodbug with a precise blast from a combat shotgun has never felt better. Plus, there’s something wonderfully unsettling about seeing terrifying creatures such as the Mirelurk Queen and mythic Deathclaw at true massive scale, barreling towards you in convincing, virtual-reality fashion. For your own movement, you can use the tried-and-true teleportation method (where you aim towards a nearby spot and materialize an instant later), or for an even more immersive experience, you can walk and run through the game using direct movement in one fluid motion using the Vive controller’s left trackpad.

Tools of the Trade

Being an RPG, Fallout 4 VR relies on various gameplay systems for leveling up, storing gear, and overall survival. Most vital details, such as character stats, experience points, game maps, items, quest details, ammo, and lots more rest inside your Pip-Boy: a wrist-mounted, green-tinted computer that serves as a kind of informational Swiss Army knife. Accessing the Pip-Boy in VR works just like you’d expect: simply raise up your left arm, and then adjust it your other hand to access its different features. Another helpful tool to help survive the Commonweath is Power Armor. Fueled by fusion cores—which you’ll need to collect and replenish to keep the suit humming—you’ll have access to many different versions, including the T-45, T-51, T-60, and X-01.

Once you’ve clambered into the metallic exoskeleton, you’ll have a whole new graphical interface to take advantage of (in addition to added height, strength, mass, and protection). The heads-up-display gives you immediate readings in rads, HP, ammo, remaining fusion-core percentage, individual armor-plating statuses, and a good old-fashioned compass. “We’ve reworked the power armor HUD,” continued Scharf. “When you get in the power armor…you can sort of tell where the [HUD] would be in the helmet if you had the helmet on. It felt more realistic and more immersive that way. When you turn on the Pip-Boy in the power armor, it’s right there. 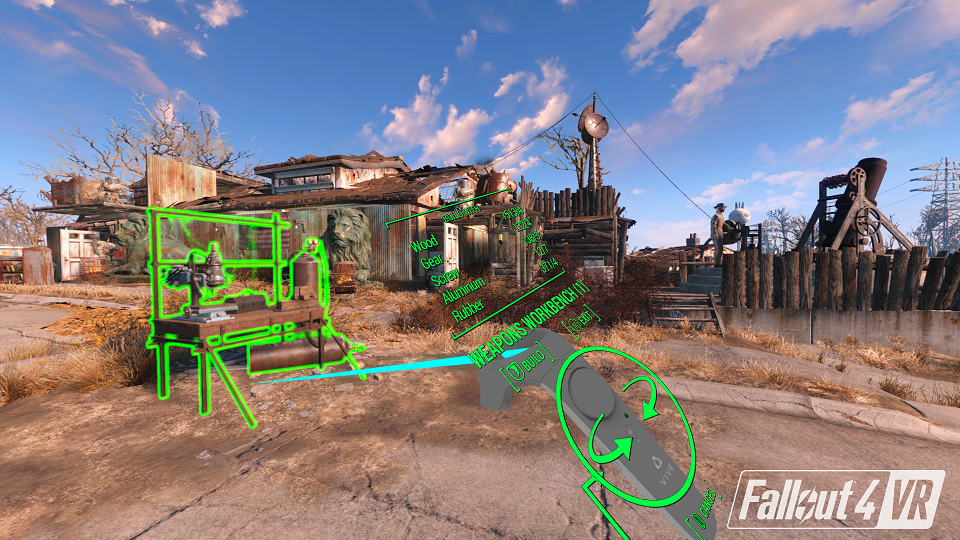 A big part of Fallout 4 VR centers around reclaiming settlements, creating customized structures and dwellings, building them back up into thriving communities, and defending them against raiders and hostile forces. In fact, you could spend countless hours focusing on just this component, if you so desire. Each settlement is your ultimate sandbox, and you can improve or neglect each one as you see fit. You can plant crops, create vendors, setup fences and automated turrets, establish trading routes with other settlements, assemble towering domiciles, and recruit additional townsfolk for a plethora of duties. “In workshop mode, we’re attaching menus to the [Vive] controllers,” said Scharf. “So you can rotate through the items that you’re going to build in your settlement. You can then use the other [Vive controller] to rotate and point where something is going to go. You can also scrap items using the right controller; you have a sort of scrapping laser, and you can scrap everything.”

And of course, it just wouldn’t be a Fallout game without a faithful canine at your side. Dogmeat, a convincingly rendered and utterly loyal German Shepard, can join up with you (along with several other human, mutant, and, robotic companions). “VR is very immersive,” Scharf notes. “It changes the game emotionally when you play it. And so, I’ll protect that dog with my life. He is a very good boy.”

You can play Fallout 4 VR starting December 12th on the HTC Vive. Make sure your gaming rig is VR Ready with a GeForce GTX 10-series GPU, like the GeForce GTX 1080 Ti.

For more about Fallout 4 VR, stay tuned to the game's official website, Bethesda.net news, as well as GeForce.com.