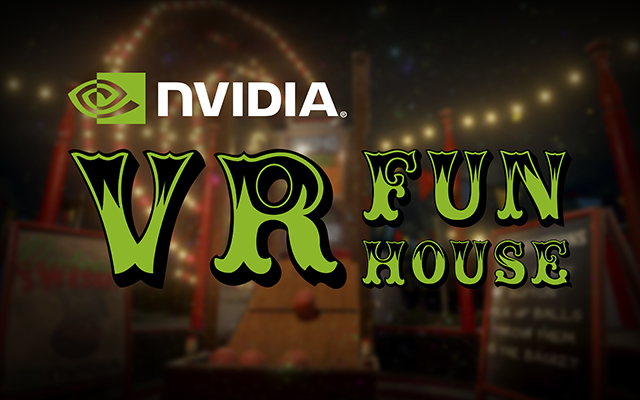 Ladies and gentlemen, boys and girls, step right up and enter the NVIDIA VR Funhouse! What you are about to experience is NVIDIA's first ever video game, one that delivers an immersive virtual reality experience like no other. The VR Funhouse is free to enter, features seven different carnival games, and challenges you to best the scores of friends and family. Step into the VR Funhouse and the future of VR realism by downloading the game for free from Steam.

Each VR Funhouse minigame exemplifies how VR experiences can be made more immersive when advanced graphics, haptics, and realistic physics are added to the mix. And of course, they're a whole lot of fun, but don't just take our word for it - as Stuff Magazine's Esat Dedezade proclaimed, "I just played the most advanced virtual reality game ever made, and it was brilliant".

VR Funhouse also demonstrates to developers the possibilities of VR, and when the game is open sourced later this summer they'll be able to peek under the hood, learn from our work, and apply the same techniques and technologies to their own games. Moreover, enthusiasts will be able to develop and release their own minigames and mods for the VR Funhouse.

Upon entering VR Funhouse, players are welcomed by lights, sounds and colors that mimic a midway carnival. Bright, stylized sandwich boards outline the basic features and instructions for playing the game, and the interactive objects presented in front of the player give them the opportunity to familiarize themselves with the controls. Once ready, players can press the HTC Vive's controller's menu button to begin.

During each game, players will experience a number of advanced NVIDIA GameWorks visual effects that enhance realism and immersion. The first players encounter is NVIDIA FleX, an extremely accurate, highly detailed particle-based simulation system that has previously brought deliciously messy blood and gore effects to Tripwire Interactive's Killing Floor 2. In the VR Funhouse, we use FleX to create the equally messy green goo in the Clown Painter level, and to add realistic pieces of cloth throughout the Funhouse. 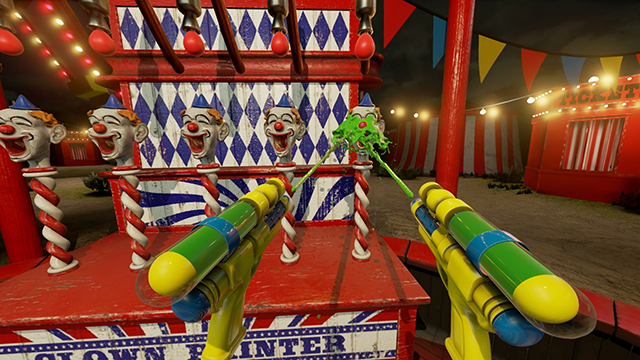 Elsewhere, NVIDIA Flow adds fluid simulation to confetti in the Balloon Knight level, enabling players' swords to affect the movement and position of the falling confetti particles. And in Fire Archer, Flow adds realistic fire effects, enabling us to light an arrow on fire, have the fire constrain to the combustible material, then spread realistically when the flame strikes a target. 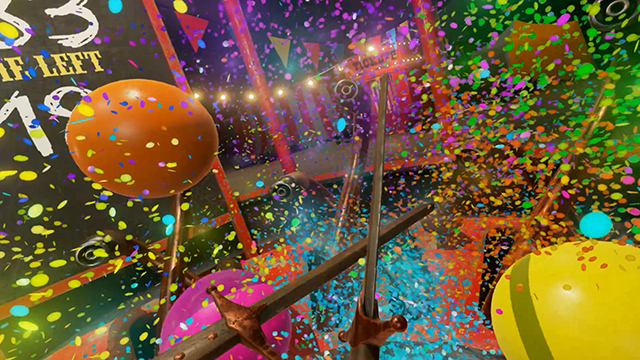 In Whack-A-Mole and Mole Boxing, NVIDIA HairWorks is applied to render physically-accurate hair on said Moles, enabling realistic reactions when you punch or strike them. Previous implementations of HairWorks include a wide-scale application in The Witcher 3, adding significant detail to characters, animals, and monsters. 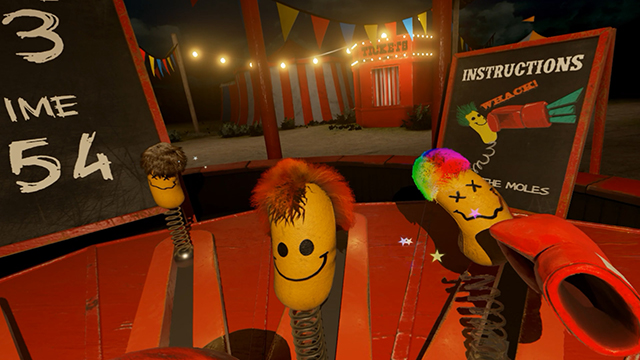 Over at the Shooting Gallery, in the Cannon Skeet, and in the intro area, NVIDIA PhysX Destruction is utilized to render life-like deformation and destruction of ceramics, wooden planks, and other objects. 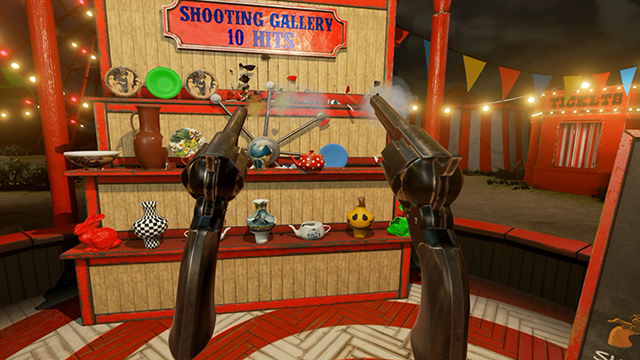 Further enhancing your sense of presence in the virtual funhouse is the application of haptics--physical reactions to actions transmitted through the HTC Vive's controllers' vibration motors. In VR Funhouse, that means the addition of physical feedback when you clang two swords together, shoot a gun, draw an arrow on a bow, or smash a Mole in the head with a hammer, to name but a few examples. Our PhysX technology provides precise collision detection between your hands and objects to trigger haptics at just the right moment for a convincing effect. 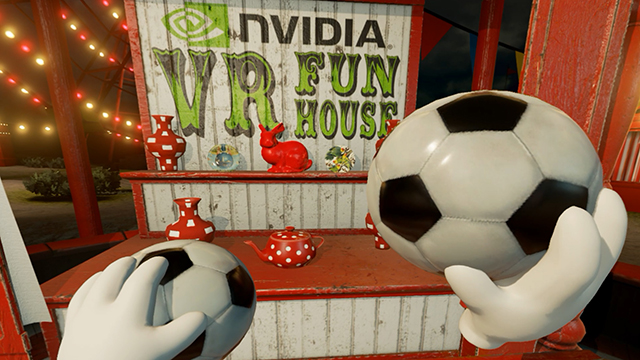 To enable the addition of richer detail, and the inclusion of even higher-quality visual effects, we leverage NVIDIA VRWorks' Multi-Res Shading to improve performance by up to 34%. This technique subdivides each eye in a VR headset into 9 parts, enabling us to independently control the resolution of each part. Doing so allows us to decrease the resolution of the image in your peripheral sight, without reducing the quality of the image in your direct vision, increasing performance while maintaining overall image quality. 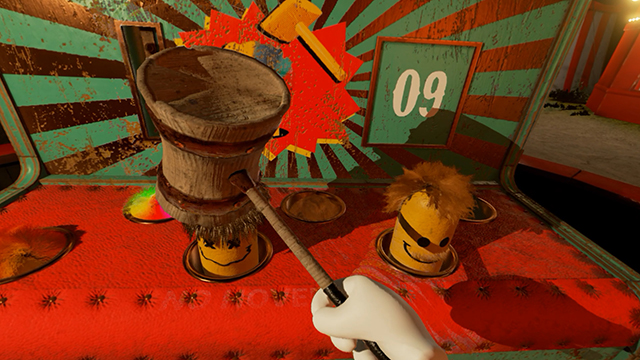 To enter into the high-tech VR Funhouse, you'll need one of the system configurations recommended below:

If you've got two identical GPUs and a GeForce GTX 980 Ti, or higher, dedicated to PhysX, VR Funhouse will activate VR SLI, enabling GPU 1 to render to the left eye in the VR headset and GPU 2 to the right eye. This improves performance while keeping latency low, further improving the experience.

With the NVIDIA VR Funhouse we hope to entertain and astound gamers with fun and immersive minigames; share our technologies, features and ideas with other developers so that they can enhance their own VR games; and inspire enthusiasts to learn Unreal Engine 4 so that they can mod VR Funhouse when the source is released in the near future.

Whether you're a gamer, a developer, or an enthusiast, you can download NVIDIA VR Funhouse now for free from Steam. Be sure to stay tuned to GeForce.com and our Steam page for news of new minigames and features that will be released in future updates.