The Rock Band franchise won over a legion of gamers by offering an engaging rhythm-based experience that perfectly captures the excitement of being a musician. The award-winning franchise allows gamers to strap on a guitar controller, take a seat behind a replica drum kit, or grab a mic to strum, beat, and sing their way through an endless catalog of musical hits.

Now, the team at Harmonix is turning things up to eleven with Rock Band VR. Developed from the ground up for modern VR and available on Oculus Rift, it promises to transport gamers from their living rooms onto a virtual stage for a rocking experience like no other. Add in a collection of incredible tunes, new VR specific features and an updated scoring system, and you have the makings of another chartbusting hit.

Getting The Band Back Together

Because the previous incarnations of Rock Band were all designed to provide an accessible approximation of playing in a band, a VR experience seems like a natural next step for the franchise. It wouldn't have been much of a stretch to adapt the rhythm-based gameplay for the Oculus Rift headset and take five. But during their early prototyping, the team at Harmonix realized that this approach didn't hit the right notes.

“The first thing we tried was to integrate our unique brand of rhythm-based gameplay into a VR environment,” says Rock Band VR Creative Lead, Greg LoPiccolo. “But traditional Rock Band is a sight-reading game that involves staring intently at one spot on the screen. We quickly realized it misses the point of VR, which lets you create a fully immersive experience. So we set about developing a completely new design that we think is a much better fit for the VR platform.”

“We paid a lot more attention to the rendering and animation quality in the game,” LoPiccolo says. “The overall level of animation polish and performance accuracy is much higher in Rock Band VR because we wanted to create a truly convincing depiction of the stage. I am particularly proud of Wes the drummer: if you watch him, he plays all the correct drums in each song, which is an amazing technical accomplishment. The lighting needed to be substantially revised as well because it's actually hitting you and your bandmates in real-time, which means it needed to be a lot more accurate and true to life.” 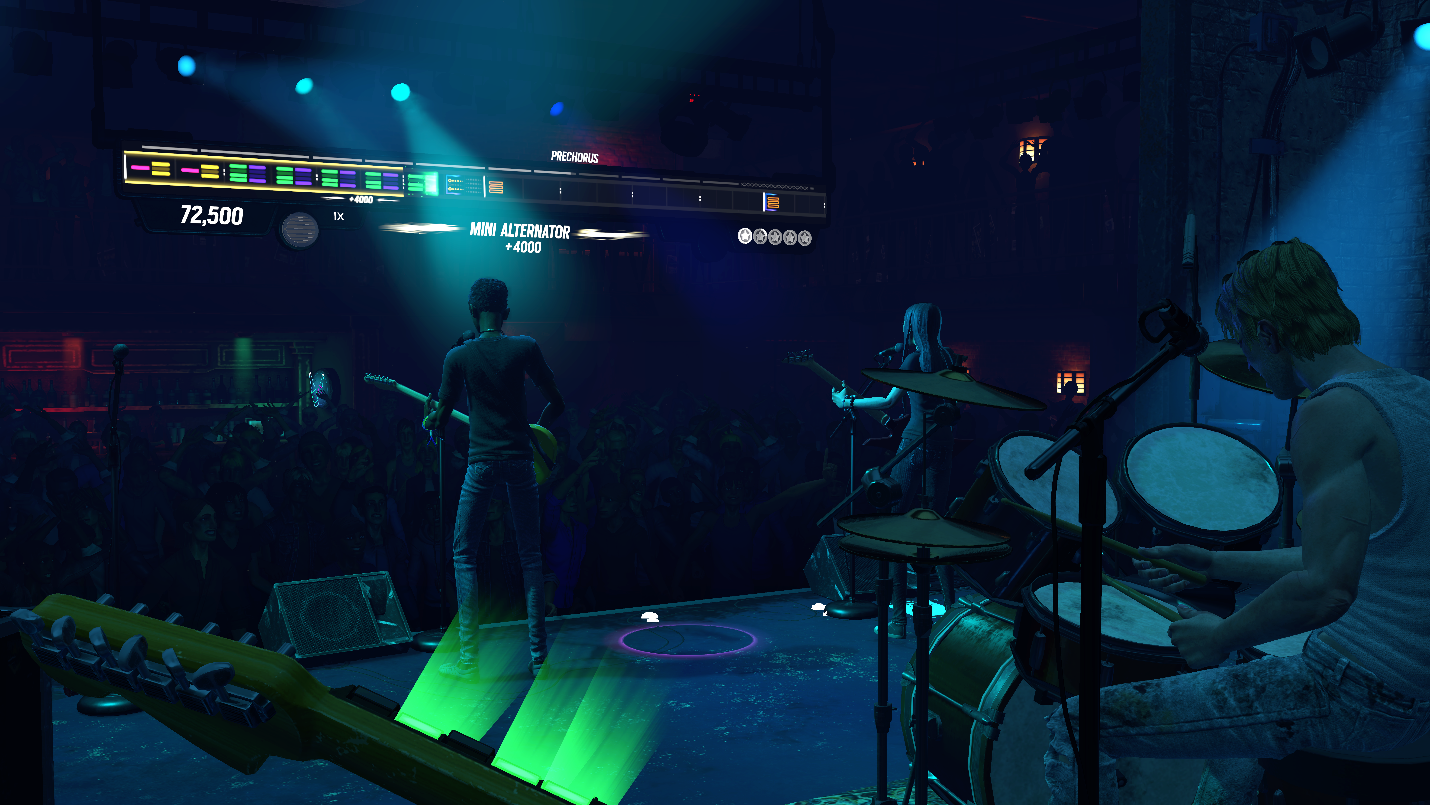 As the previous examples prove, it took a lot of work to bring Rock Band to the Oculus Rift. Thankfully, the development team found that their newfound focus meshed well with a VR experience.

“Simulating an on-stage performance is a great fit for VR,” LoPiccolo says. “There aren't any of the locomotion issues that some other games struggle with because you're standing on a stage.  The sense of immersion is amazing: you can really feel the energy of the crowd and sonic impact of your guitar coming from your amp, along with sounds from all your bandmates. Even leaving the gameplay aside, it is just an amazing emotional experience being onstage in front of a crowd.” 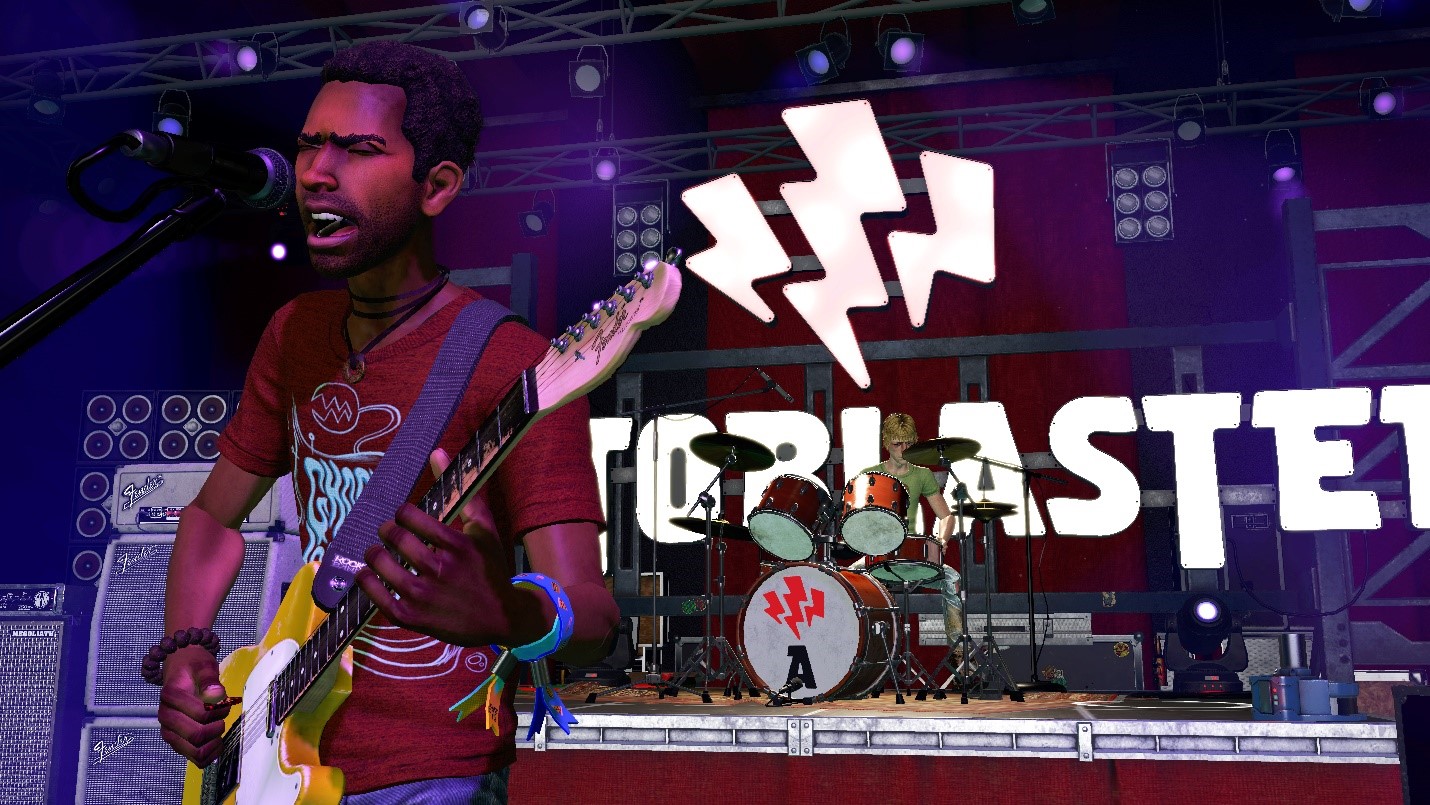 The switch to VR also allowed them to add in features that are uniquely adapted to the Oculus Rift headset. Physically look behind you and your drummer will start to count down to the start of the song. Glance at the foot pedals by your feet and you can cycle through different guitar effects.

“You can also teleport around the stage and rock out with each of your bandmates,” LoPiccolo adds. “You can hit the drumkit cymbals with your guitar headstock. There's also a lot of hidden secrets that we want the players to find on their own!”

The ability to add a Oculus Touch controller to the headstock of the Rock Band guitar also adds another layer of immersion.

“We did it so we could track the movement of the guitar controller and render it realistically in the game,” LoPiccolo explains. “It gives you the impression that you are the guitar, which really works well to make you feel like you're actually on the stage.”

While the transition to VR was smooth, it wasn't without its challenges. The biggest hurdle resulted from the team's ambition: Rock Band VR doesn't just offer a new perspective but a completely revamped music system as well.

“The guitar simulation in Rock Band VR lets the player generate completely new guitar tracks as they play,” LoPiccolo says. “You can craft rhythm and solo guitar parts on the fly to suit your creative tastes. The technical complexity and sonic craftsmanship necessary to pull that off was pretty daunting. To be honest, I wasn't sure we could actually do it until we did.”

While difficult to implement, its features like this that allow Rock Band VR to provide such a realistic stage experience. That focus on realism was a natural result of the fact that multiple members of the development team have firsthand experience performing for an audience.

“A number of people on the team, myself included, are or were in working bands, so we relied on our experiences performing on stage,” LoPiccolo says.

Of course, anyone who's been involved in a live performance knows that things can sometimes go awry, and the development team worked to include these kinds of challenging situations into the game.

“One of the most fun parts of replicating the live performance was including all the shows where things aren't going as planned.” LoPiccolo says. “You'll have shows where only a tiny audience shows up, or the crowd starts heckling you, or your equipment malfunctions.” 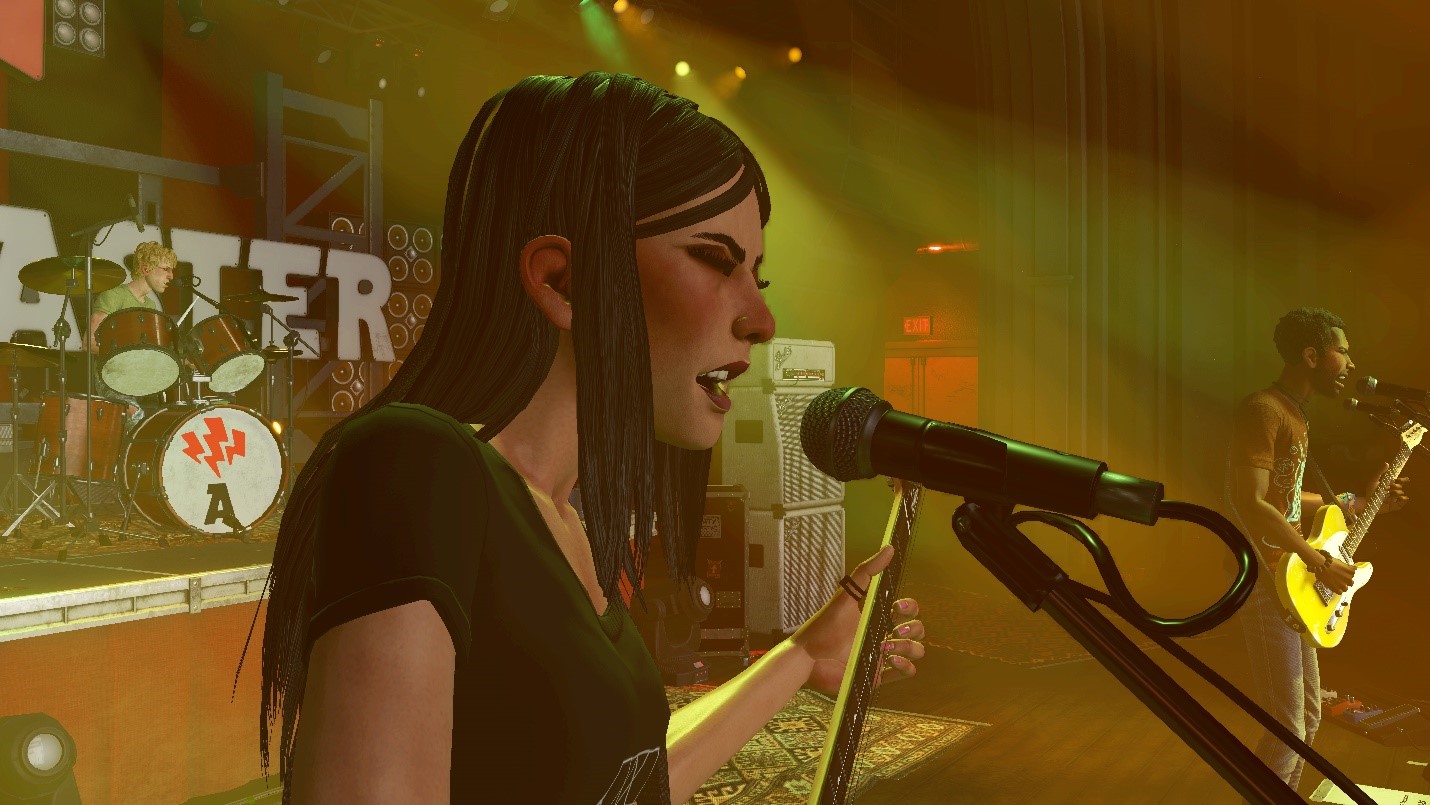 So why expose their fans to such negative sounding situations? It's all in the name of realism and good natured fun.

“That kind of crazy and difficult stuff happens to real bands all the time,” LoPiccolo explains. “Obviously, you'll have successful shows where every fan is screaming your name, but it's fun and rewarding to experience the other side of rock stardom.”

The final aspect of Rock Band VR that the development worked to get right was the tracklist. Part of the reason why Rock Band was so popular was that it featured an absolutely killer collection of songs that were as enjoyable to listen to as they were to play through. Rock Band VR continues that tradition with a mix of classics like Aerosmith's “Walk This Way” and modern hits like Paramore's “Ain't It Fun.” When asked if the transition to virtual reality affected the set list, LoPiccolo notes that the quality of the track was the top priority.

“Our starting philosophy was ‘if it's a good song, we'll find a way to make it work in Rock Band VR.' So we put a ton of work into making the music engine and gameplay flexible enough to work with a wide variety of songs,” he says. “It's always been a hallmark of the Rock Band franchise that we support a broad variety of rock genres and artists, and we were determined to carry that forward in Rock Band VR.”

Fans will be pleased to hear that Rock Band VR will pay tribute to favorite tunes from past installments.

“The licensing team outdid themselves on this title,” LoPiccolo says. “They worked to include a whole set of ‘greatest hits' songs that have been in previous Rock Band games. We also secured some new licenses that are unique to Rock Band VR.”

Harmonix is also dedicated to helping budding performers reach a greater audience as well. Considering how popular the previous installments were, having a song included in the set list can earn an artist a great number of fans. While LoPiccolo wasn't at liberty to discuss specifics, he says that Rock Band VR will include “songs from some emerging artists that we think are great and are excited to introduce to our fans.” 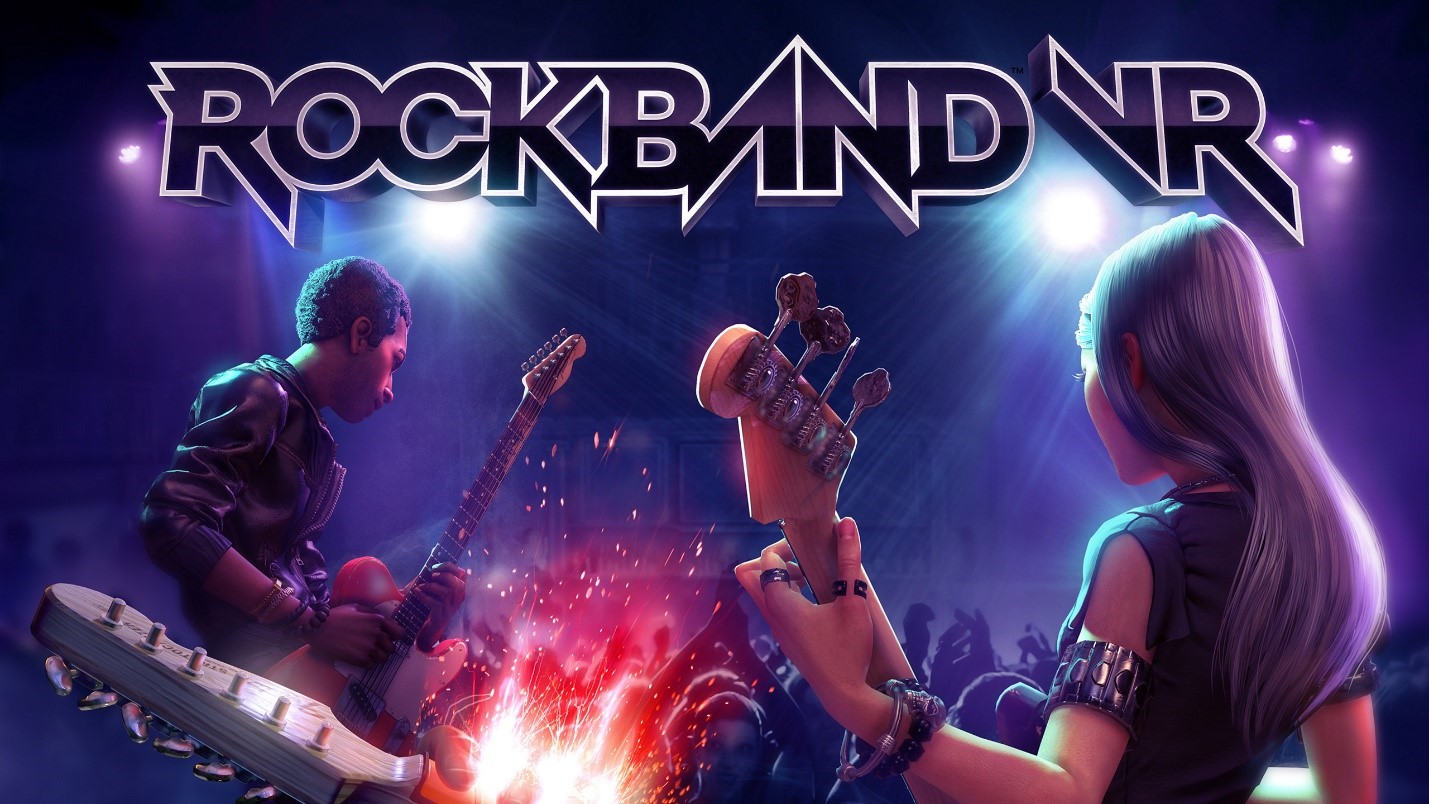 Music history is full of performers who have evolved throughout the years in order to fulfill their creative passions and stay relevant with their fans. The legendary David Bowie and the iconic Madonna are two examples of artists who explored new sounds and personas in order to entertain and inspire us.

It's in this fashion that Harmonix takes the stage with Rock Band VR. While the game retains elements of the classic franchise formula that helped it rocket to the top of the charts, it also has plenty of new elements that promise to take things in a bold direction. With a great mix of the familiar and the fresh, it should please its established fanbase while drawing in a new audience who will soon know the joys of rocking out in a band in VR.