Titanfall 2 is one of the Holiday season’s most anticipated titles, building upon the fast, fluid, and fun Pilot and Titan gameplay that is at the core of the Titanfall experience, whilst also adding more Titans, more maps, and new gameplay mechanics. Additionally, Titanfall 2 sees the introduction of an engrossing single-player campaign that sends players into the Frontier as a Militia rifleman with aspirations of becoming an elite Pilot. Stranded behind enemy lines and facing overwhelming odds, players must team up with a veteran Titan to uphold a mission they were never meant to carry out.

Ahead of Titanfall 2’s release on October 28th we’re excited to unveil the world’s first look at Titanfall 2 running on PC at 4K, at 60 FPS, with every game setting maxed out:

To experience that level of detail and fluidity at home, Respawn Entertainment is recommending gamers equip their systems with a NVIDIA GeForce GTX 1080, the only consumer graphics card capable of playing Titanfall 2 at 4K, at 60 FPS, at the time of writing.

With settings virtually on max you’ll see Insane-quality textures, NVIDIA HBAO+ Ambient Occlusion effects, and higher-quality anti-aliasing, effects and shadows. And with a high level of performance you’ll have smooth, stutter-free gameplay even during the most explosive moments in Titanfall 2’s fast-paced multiplayer matches.

To give an even-clearer idea of how their system requirements will perform, Respawn Entertainment has benchmarked the aforementioned Minimum, Recommended and Ultra systems, and shared their results. Over on their PC blog you’ll see framerate charts showing performance across the duration of their benchmark, plus the minimum, maximum and average framerates. And below each chart you can see the game settings used in each test. 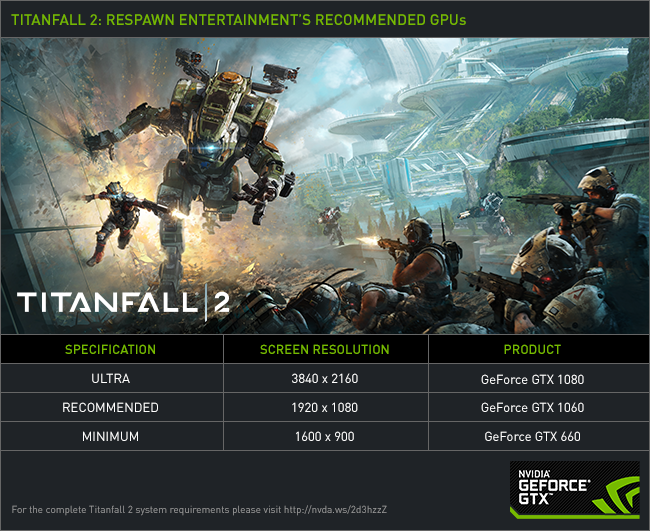 Systems and laptops equipped with a GeForce GTX GPU can also take advantage of our vast array of game and experience-enhancing technologies:

Between the GeForce GTX 10-Series’ blazing fast and super smooth performance, NVIDIA experience-enhancing technologies, and the many in-game options, the definitive Titanfall 2 experience will be found on GeForce GTX systems and laptops.

To see even more PC gameplay footage, and to learn about the PC Anti-Cheat technology being employed by Respawn Entertainment, visit the official Titanfall website. And to pre-order Titanfall 2 ahead of its October 28th release, head to Origin.