Vulkan, a new graphics application programming interface, launched today. With a simpler, thinner driver, and efficient CPU multi-threading capabilities, Vulkan has less latency and overhead than OpenGL or Direct3D, and can help your system reach new levels of performance. In simpler terms, Vulkan can help developers avoid CPU bottlenecks that limit performance, and can improve performance elsewhere, too.

If you’re a GeForce GTX gamer, simply download this special Vulkan driver and you can try the new API today in The Talos Principle, a critically-acclaimed puzzle game that’s been upgraded with Vulkan support.

With Vulkan’s complete utilization of available system resources, as well as its own performance optimizations, developers using the new API can create more detailed and immersive worlds, and add additional visual effects that further enhance the experience. Latency is reduced by other Vulkan optimizations, and cross-platform support enables the creation of low and high-end versions of the same game on mobile devices, PCs, and other platforms that come to support Vulkan.

The Talos Principle running on Vulkan.

NVIDIA has worked closely with the Khronos Group, the creators of Vulkan, throughout its development, and as of today all Kepler and Maxwell graphics card running Windows 7 or later, or Linux, are supported by Vulkan.

This immediate support is already enabling developers to craft new experiences, with John Carmack, Oculus Chief Technology Officer, saying, “We have been using NVIDIA hardware and drivers on both Windows and Android for Vulkan development, and the reductions in CPU overhead have been impressive.” 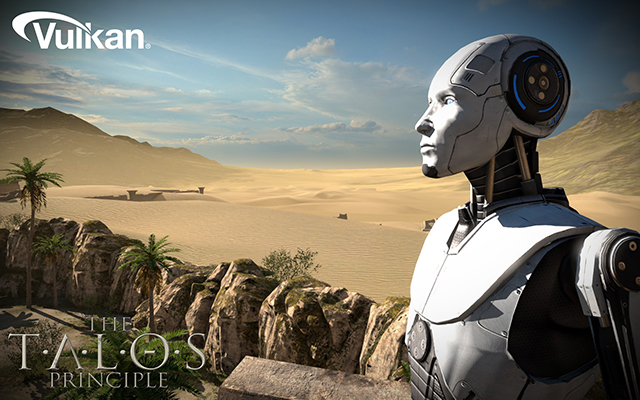 The Talos Principle running on Vulkan.

With the Vulkan API, and the right programming, your existing hardware will reach new levels of performance. Other games and engines that leverage these opportunities are on the way - for info stay tuned to GeForce.com. In the meantime, check out The Talos Principle on Steam.

For info on how Vulkan helps developers, click here.