When we announced the GeForce GTX 1080 and GeForce GTX 1070, the world’s fastest and most advanced graphics cards, we unveiled several new technologies designed to improve and enhance your games and experiences. Of those, NVIDIA Ansel drew the most attention, offering gamers a powerful, easy-to-use camera that could capture unique, professional-grade 2D, 360° and Virtual Reality 360° screenshots on GeForce GTX graphics cards.

Today, we’re releasing NVIDIA Ansel for EA™ DICE™’s Mirror’s Edge™ Catalyst. Capture personally-framed freecam screenshots, adjust the field of view and rotation of the screen, add optional Instagram-style filters, and save to shareable filetypes with a single click. At any point during gameplay hit the Ansel hotkey and you’ll be able to capture stunning screenshots that were previously impossible to frame and snap. 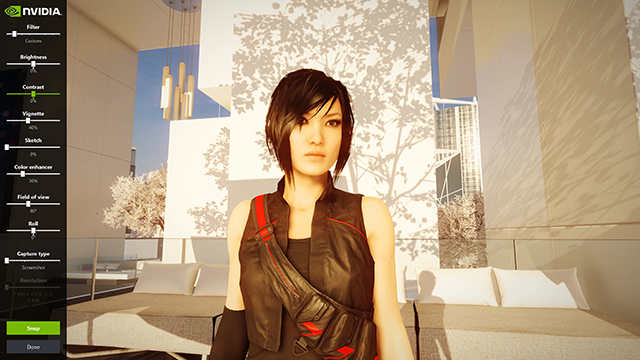 Using the Ansel options supported by Mirror’s Edge Catalyst you’ll be able to capture 2D, 360° panorama and Virtual Reality 360° Stereo screenshots, apply filters, define your own custom filter, and adjust framing for the perfect view. Take a look below for further info.

Freeze time, and roll, zoom and reposition the camera. Go wherever you want within a preset radius during any mission or moment to create the perfect shot.

Tweak the look, feel and mood of your screenshot before capturing using the included filters, or manually adjust brightness, contrast and other options yourself. 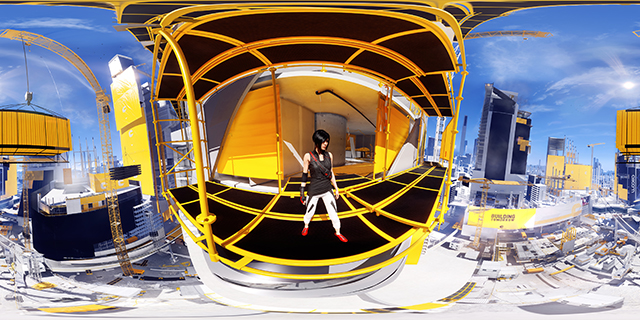 View the screenshot in a 360° photosphere here

NVIDIA GeForce GTX GPUs dating back to the 600 Series support NVIDIA Ansel, so make sure you download the latest Game Ready driver and the new Mirror’s Edge Catalyst game update today to start capturing your own, unique, professional-grade screenshots. And once you have something you’re proud of, send it to us via Facebook, Instagram, or Twitter for a chance to have your image shared with our millions of fans.

This is just the beginning for Ansel, so stay tuned to GeForce.com for news of future developments, and the implementation of Ansel in other top titles.

EA, DICE, Origin, and Mirror’s Edge are trademarks of Electronic Arts Inc. and its subsidiaries.